As we continue looking for video content to consume while we’re stuck at home, Martha and I have gone back to watch a few classic movies recently, including these three, which I’ve added to my Movies You Might Not Know list… 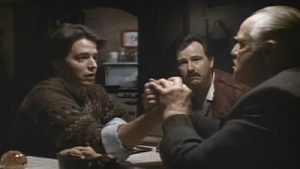 “The Freshman” (1990) is a crime comedy about Clark (Matthew Broderick), a mild-mannered college student from Vermont who, on his first day in New York City, has all his belongings stolen by a thief named Victor (Bruno Kirby). Clark eventually catches up to Victor, who claims not to have any of his stuff, but offers Clark a chance to make big money working for his uncle Carmine, played by Marlon Brando in full Don Corleone mode (he looks, acts, and speaks just as he did in “The Godfather”). Clark is hesitant, but Carmine takes a liking to him, and tells him the job involves nothing illegal. Next thing Clark knows, he and his roommate (Frank Whaley) are transporting a Komodo dragon from JFK Airport to an address in New Jersey. As if that’s not enough, you get Penelope Ann Miller as Carmine’s daughter, Jon Polito and Richard Gant as agents from the Department of Fish and Wildlife, Maximilian Schell and BD Wong as Carmine’s associates, and Paul Benedict as Clark’s professor. Oh, yeah, longtime Miss America pageant host Bert Parks shows up as himself to sing a few songs, including Bob Dylan’s “Maggie’s Farm.” The man responsible for all of this is writer/director Andrew Bergman, whose resume also includes creating two of the funniest movies ever, “Blazing Saddles” and “The In-Laws,” plus the original “Fletch” and “Honeymoon In Vegas.” The fact that he got Brando to parody himself is enough to make me love “The Freshman.” 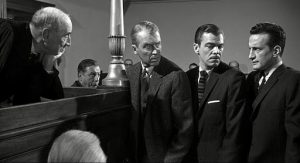 “Anatomy Of A Murder” (1959) is a courtroom drama produced and directed by Otto Preminger with an all-star cast, including Jimmy Stewart, Lee Remick, George C. Scott, Arthur O’Connell, Ben Gazzara, Eve Arden, and Murray Hamilton. Stewart plays a lawyer representing Gazzara, a soldier who’s charged with murdering a bar owner who raped his wife (Remick). The District Attorney (Brooks West) gets some help from a hotshot prosecutor from Lansing (Scott), and the legal fireworks are set to go off. Stewart is assisted by Arden as his secretary and O’Connell as a lawyer who had a great reputation before he started drinking. In the midst of all this is Remick, having a great time as a very extroverted woman who catches everyone’s eye. Preminger takes his time introducing the characters and the case, but when he gets us into the courtroom, he keeps us riveted as the actors all turn in top-notch performances. Frankly, I’d have been happy just watching Stewart, Scott, and Remick read a menu out loud — they’re that good. 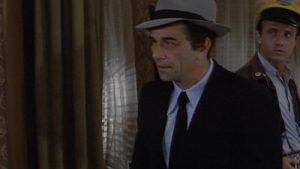 “The Cheap Detective” (1978) was Neil Simon’s followup to his hilarious murder-mystery parody “Murder By Death,” with Peter Falk returning as a private eye who sounds more than a little bit like Humphrey Bogart. The plot combines elements of “The Maltese Falcon” and “Casablanca,” with Falk trying to prove he wasn’t the one who killed his partner while simultaneously working for several clients searching for a lost treasure. The supporting cast was a who’s who of comedic and character actors from the era: Madeline Kahn, Louise Fletcher, Ann-Margret, Eileen Brennan, Stockard Channing, Marsha Mason, Sid Caesar, John Houseman, Dom DeLuise, Abe Vigoda, James Coco, Phil Silvers, Fernando Lamas, Nicol Williamson, Scatman Crothers, Vic Tayback and Paul Williams. I don’t know what the official joke count was for “The Cheap Detective,” but let’s just say that Simon didn’t miss an opportunity to go for laughs anywhere in the script, a mission he accomplished more in one movie than most writers do over the course of their careers.