Who You Calling Ginger? 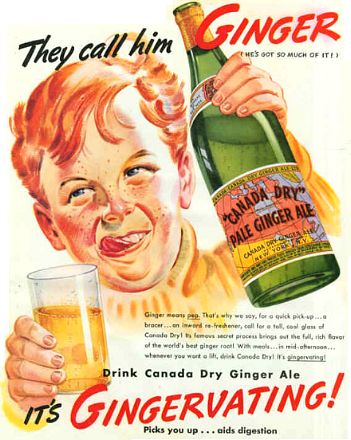 In a restaurant the other day, I overheard a woman at the table behind me ask the waitress if they had ginger ale. The waitress replied, “No, but we can make it for you.”

How do they do that? They don’t. A friend who used to be a bartender told me they rarely have real ginger ale in the soda gun. So they fill a glass with Sprite and then add some Coke for color, and call it ginger ale. There’s no ginger involved, thus it doesn’t even taste like ginger ale, but rather a lemon-lime concoction splashed with caramel color.

This wasn’t the first time I’d heard this. Once, in a poker room, one of the players asked for a ginger ale and the waitress brought him the bogus non-ginger-ale soda combination. He tasted it and immediately knew it was wrong. Worse, he then explained to the waitress that he has a heart condition and can’t have any caffeine, so giving him Coca-Cola without his knowledge was dangerous!

Is there any other drink that would get this treatment? When Starbucks runs out of chai tea, do they just make a cup of coffee with a little bit of orange juice? Would a bartender ever pretend to make a bottle of red zinfandel by mixing Pinot Noir and a splash of Liebfraumilch? I’m sorry sir, we don’t have Clamato, but we can mix tomato juice with jumbo shrimp, if you like.

Unfortunately, this soda logic violation must be working or they wouldn’t keep doing it. People who want ginger ale are settling for Coke-splashed Sprite, rather than making another beverage choice.

I’m reminded of the time I asked a Burger King clerk if they had root beer. He answered, “No, but we do have Diet Sprite.” How is that a consolation prize for someone who wants root beer? Is there anyone who goes in, asks for a root beer, gets that answer, and says, “Perfect! Give me a large one of those!”??? Conversely, would anyone who asks for a Diet Sprite be satisfied to be told, “We don’t have that, but we do have Dr. Pepper”?