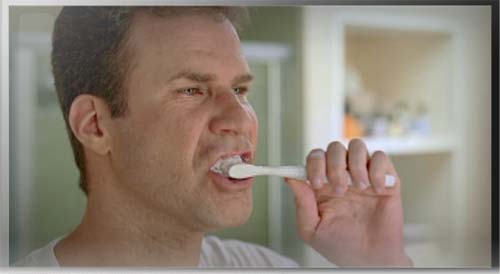 It’s the story of Harold Crick, an IRS auditor played by Will Ferrell, who wakes up one morning to hear the voice of a woman narrating his mundane life. It turns out that the woman (Emma Thompson) is a real-life author writing a book in which Harold is a fictional character. Crick goes to a university professor (Dustin Hoffman) for help and somehow gets involved with a quirky bakery owner (Maggie Gyllenhall), all the while living his life as the author describes it — until she makes an editorial decision he can’t live with.

Don’t expect Ferrell to be the same goofball he plays in “Semi-Pro,” “Anchorman,” and “Talledega Nights.”  This is a solid dramatic (though funny and touching) performance, similar to the break-out role Jim Carrey played in “The Truman Show.”  Look for Queen Latifah and Linda Hunt in small supporting roles.

“Stranger Than Fiction” didn’t do nearly as much box office business as it deserved, so I hope it finds an audience on DVD. I give it an 8.5 out of 10.