Wizard Of Oz In One Sentence

This newspaper TV listing for “The Wizard Of Oz” was written in 1998, but for some reason went viral again this week after someone posted it on Reddit.  The man behind it is Rick Polito who, at the time, worked for the Marin Independent Journal, but now writes his hilarious TV synopses for the Pacific Sun. 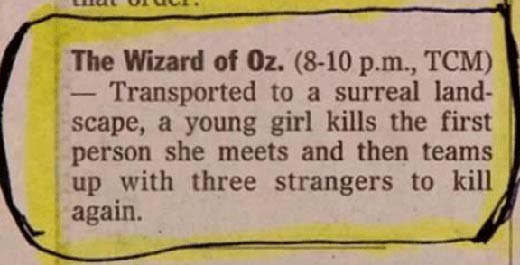 Updated 11:26am…After posting the above, I received an e-mail from Rick Polito:

I’m starting a movement.  The line went viral his week because Jay Leno used it in
Headlines for the second time with the wrong name attached. So my best joke is
out there being seen by many millions with the wrong attribution. Jay needs to
make things right by having me on the show. Email the show, then tell everybody you know to do the same.  I demand justice! (or a least eight minutes on Jay’s couch).

I replied to Rick with an invitation him to join me on KTRS Radio to talk about this and a few other things.  He’s agreed, and our conversation will air Monday at 1:10pm CT.