You’re Not On The Air 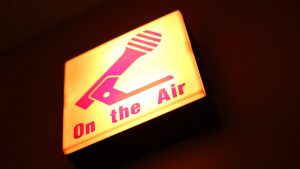 When I first started doing talk radio in St. Louis on KTRS, there was a regular caller who identified himself as Dave from Overland. Regardless of the topic I was discussing, Dave called every day to chime in. It became clear to me very quickly that Dave was a lonely, older guy for whom I was providing companionship and connection.

The problem was that Dave never had anything interesting to say. It was like meeting your neighbor at the end of the driveway and engaging in the same small talk that goes nowhere. He didn’t offer any opinions or make intriguing comments. He just wanted to reach out.

Unfortunately, that made for very bad radio. I was there to entertain the entire audience, not to serve as a social worker for one man, and I had plenty of other callers to get to. So, after a few days, I told my phone screener to not let Dave through anymore. I told her to gently apologize, but tell him firmly, “We’re not going to have time for you today.”

The irony is that if had just identified himself differently (e.g. Mark from Valley Park, Jim from Collinsville), he would have gotten through. But then I would have had the tough task of cutting him off so another listener could join the conversation.

Dave kept trying for a week or so, then gave up, and I never heard from him again. Maybe he found another midday talk radio show to call.

I had the same problem with another listener, but this one put up a fight. His name was Bill Haas, a perennial candidate for pretty much every public office he could run for — mayor of St. Louis, city alderman, the Missouri Legislature, US Congress, lieutenant governor, and even president of the United States. The only election he ever won was for a single term on the St. Louis school board.

Unlike Dave, Bill had plenty to say on pretty much any issue I brought up, and felt it was his right to be heard on the air. But, like Dave, Bill was a bore, always coming back to the same points regardless of the topic. I winced every time he got through because I could hear listeners tuning away.

Eventually, I had to tell my screener that Bill was no longer welcome on the show. When she gave him a polite brush-off the next day, he didn’t take it well, screaming at her that she had to put him through. She pressed hold and, during a commercial break, told me he wouldn’t take a hint. That’s when I picked up the phone (off-air) and clearly explained I would no longer take his calls and he’d better stop being rude to my screener. He began to object loudly, but I interrupted him to repeat my decision and hang up.

I proceeded with the show as if nothing had happened, because no one listening would have had an inkling. But when I took my next commercial break, the station’s General Manager popped his head in to say he’d just gotten an angry call from Bill, who ranted at length, insisted he had a constitutional right to be on the air. Fortunately, the GM backed me up and backed Bill off, and that was that.

If I’d thought of it at the time, I would have given Dave’s phone number to Bill so they could both have someone to talk to. As long as it wasn’t me.