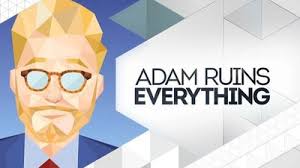 After a successful 26-episode run of the first season of “Adam Ruins Everything,” Adam Conover returned to my show to discuss the upcoming second season, which premieres on TruTV on July 11th.

We talked about what he’ll take on this year, whether he’ll be ruining the Emmy Awards, and which issues he purposely stays away from. We also discussed the immigration mine field he stepped into in season one, the backlash he’s gotten over his episode on electric cars, and why viewer feedback has made him re-think his take on some subjects.