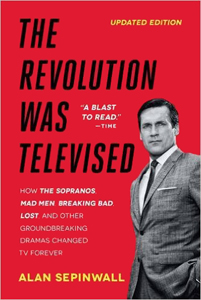 Here’s my conversation with Alan Sepinwall, TV critic for HitFix.com, about the updated version of his book, “The Revolution Was Televised: How The Sopranos, Mad Men, Breaking Bad, Lost, and Other Groundbreaking Dramas Changed TV Forever.” When he published the first edition in 2012, “Breaking Bad” and “Mad Men” hadn’t finished their runs, so he’s gone back and revised those chapters and added a few other observations in retrospect. Some of the topics we covered: