An Afternoon On Fire

“Paul, in all your years in radio, were you ever faced with having to cover a news story that broke while you were on the air, as Joe Buck and Troy Aikman had to when Damar Hamlin went down during Monday Night Football last week?”

Yes, Taylor, there were many events which forced me to throw away whatever I had planned for that day and switch to breaking news mode. Here’s one of those that left an indelible mark on my memory. The date was June 24, 2005… 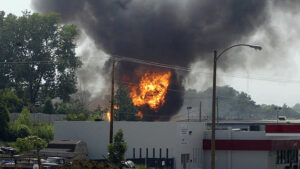 “There’s a big fire at Jefferson and Choteau!”

That was the voice of a caller to my KMOX show, alerting me to the story that would within minutes take up the rest of the afternoon.  It was 3:35pm Friday.

I got as many details out of him as I could, as my producer, Fred Bodimer, relayed the tip to our news department.  Moments later, several other lines lit up with callers who had also seen the fire:  “There are flames shooting way up in the air!”  “We’re two blocks away and can still hear explosions!”  “I was in my car when everyone started running!”  “The windows in our building were bending from the blasts!”

The KMOX newsroom jumped into action.  Two reporters, Megan Lynch and Michelle Wirth, left the building immediately and headed to the scene.  Other news people worked the phones.

Fred simultaneously kept the calls coming in and told me what was going on via the off-air feed into my headphones, like Holly Hunter feeding information to William Hurt in “Broadcast News.”

By 3:40pm, we were in total breaking news coverage mode.  At about that time, KSDK-TV broke into their programming with a live shot of the fire from their helicopter.  Through the dense black smoke, we could see explosions sending flames shooting high into the air like solar flares.  I described this for my listeners.

Listeners kept calling with eyewitness accounts.  Soon, Megan was on the scene and had a report.  We went live to her and she described what she could see (and feel) from as close as she could get.  As she was talking, Fred tipped me that Michelle was on another line, also from the scene, with a local resident who had heard the first explosion.

Kevin Killeen came into the studio from our newsroom to report that the fire was at a business called Praxair, which provided atmospheric and industrial gases, and that there hadn’t been any reports of injuries yet.

Amidst more caller eyewitnesses, news director John Butler sat down to provide some quick background on Praxair.  Then Megan and Michelle were ready with more information from the scene.

Via the talkback system, Fred said in my ear, “CBS is now feeding your show to the entire radio network.”  I didn’t have time to process that, but later found out that stations in other cities had put KMOX on the air so their listeners could hear what was going on in St. Louis — my sister-in-law in New Jersey was shocked to suddenly hear my voice coming out of her radio, which was tuned to WCBS in New York.  A friend in DC heard it, too.

I kept bouncing back and forth between callers and reporters, recapping the story often for anyone who might just be tuning in.  Listeners were now reporting debris flying all over the place, including in the adjacent residential neighborhood.  One guy said a cylinder had landed in his yard, some ten blocks away.

I threw it to airborne traffic reporter and pilot John Larrabee to report on the Praxair fire from above.  He stayed up for about a half-hour before it became too dangerous for him to both fly the plane and be on the air, because of the explosions and all the other news and police aircraft circling the site.  So he went back to the airport to pick up Captain Rodger Brand, who took over the reporting while John kept them safe but within viewing range.

I glanced over at the three TV monitors we have in the studio to see that MSNBC was now airing the live shot from the KSDK helicopter, as was CNN.  The latter was getting information on air via phone from one of the first reporters on the scene, KMOX’s Megan Lynch (who did the same for Fox News Channel later).

Fred told me not to worry about going to the network news at the top of the hour or getting to any commercials.  As we rolled into the 4pm hour, we were the only radio station devoting nonstop coverage to the event.

Bob Hamilton, a veteran KMOX newsman, sat down next to me in the studio.  Bob happens to live three blocks from Praxair and, since he works the night shift on KMOX, had been asleep when the explosions woke him up.  He described his first person experience, then stayed in the studio for the next two hours providing the neighborhood perspective and helping to define the boundaries of the area that was closed off and which roads to avoid.

Listeners kept calling to report seeing the smoke from miles away.  Dan McLaughlin, one of our sports guys who was at the ballpark to cover the Cardinals/Pirates game that evening, called to tell me that none of the players were practicing on the field — they were all huddled around radios and TVs following the story.

Kevin returned with more information and the amazing point that we still had no reports of fatalities or injuries.  Even SLU Hospital, which would have caught the first trauma cases, hadn’t seen any yet.

Newswoman Carol Daniel raised the question of whether the smoke and fumes from this explosion might be toxic.  Fred hooked me up with a chemistry professor to explain the possibilities.  As firefighters pumped water onto the site from at least three companies, St. Louis Fire Department spokeswoman Kim Bacon told me they were testing the air and trying to determine the cause of the fire, but there were no results yet.

I’ve always had an open-door policy during my show — anyone with anything good can come in and sit down at a microphone at any time.  Now the entire team was feeding me information, one right after the other, both in the studio and from the scene.

My adrenaline was really pumping.  I was aware of nothing else but this story and this broadcast.

Chuck, a former Praxair employee, called at about 4:30pm.  This gave us an insider, someone who knew the plant and could explain what was on fire and what might have caused it.  I kept him on the air for several minutes, throwing every question I could think of at him.  I told him I was amazed that no one had been reported injured and wondered if the workers were prepped and drilled for just such an emergency.  He said nothing like this had ever happened there before, but yes, everyone knew what to do, where to go, and where the firewalls were, just in case.

Our traffic team reported that the police were going to close Highway 40, concerned about the airborne cloud of smoke that had moved north from the fire.  That meant a major artery in and out of the city was shut down, and we’d have to give listeners alternate routes.  It wasn’t bad enough that this happened while people were leaving work for the weekend, but we also had 50,000 fans coming into town for the Cardinals game.

As we approached the top of the hour, Fred suggested we take a break, go to the network newscast and re-group.  As the 5:00pm tone sounded, I turned off my microphone, took off my headphones, and got up to stretch my legs.  Fred told me I had been talking for 80 minutes straight without a break.

My engineer, Kevin Niemeier, who pushes all the buttons and handles all the audio feeds during my show, also stood up and let out an audible sigh of temporary relief.  He was doing a great job staying on top of the very hectic technical end of the show.

As I made a bathroom visit, Carol picked it up out of the network (which had included some of our own audio!) to reset the story and fill in everyone who was just getting off work.  At about eight after, as I walked back into the studio, I was told that the Cardinals had pushed back the starting time of their game a half-hour because of the havoc on the roads.  I jumped on the air with Carol to report that news and keep the flow going.  My boss, Steve Moore, called to say that we should try to get a few commercials in — we hadn’t played one since 3:30pm — so we took a break.

Eventually, the police chief and the mayor called in from the scene with their official assessments.  Mayor Slay wasn’t happy when I told him that several residents of the area had told me they’d had concerns for years about having an industrial neighbor like Praxair.  He responded that he’d never heard those concerns, but was going to look into them and the possibility of getting the company out of there.  As he hung up and I went to commercials, I wondered if Praxair had any company left, at least at that location.

By now, the fires were mostly out, although the hot zone would remain for quite awhile, and the traffic snarls wouldn’t ease for a couple of hours.

I wrapped things up as the clock headed to 6:00pm, and Bob Hamilton took over the microphone for the half-hour evening news block (regular anchor Rick Edlund was still stuck in the congestion on Highway 40).  As I left the studio, several people — including our General Manager, Dave Ervin — offered congratulations on the broadcast, and I praised the newsroom and our behind-the-scenes staff for keeping us on top of the story better than anyone else.  There’s a reason they’ve won all those awards.

As the rush of energy that had kept me going for the those two and a half hours subsided, all of that afternoon’s information was replaced in my brain by one thought:  I love doing this for a living.