On our trip to New York last week, my wife and I took in three Broadway shows… 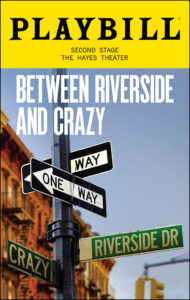 The best was “Between Riverside and Crazy,” which revolves around Walter, a recently widowed ex-cop who lives in a rent-controlled apartment on Manhattan’s upper west side with his ex-con son Junior, Junior’s girlfriend Lulu, and Junior’s friend Oswaldo. Walter not only has to put up with them, but also battle the landlord, who wants him out so he can raise the rent. Then there’s the issue of Walter’s lawsuit against the city, which refuses to compensate him for being shot six times while off-duty by a rookie cop eight years earlier.

The play is both comic and tragic, and includes a few twists in the second act I did not see coming. Playwright Stephen Adly Guirgis and director Austin Pendleton give everyone plenty to do, but it is Stephen McKinley Henderson’s performance that makes “Between Riverside and Crazy” a must-see. Henderson has spent a long career as a character actor, often playing a leading man’s best friend, as he did with Denzel Washington in “Fences.” He was also the priest in “Ladybird” and Jennifer Lawrence’s therapist in “Causeway.” Here Henderson portrays Walter as a strong-willed yet sympathetic man fed up by much of what surrounds him. I hope he gets a Tony Award for this.

The supporting cast includes four actors making their Broadway debuts: Common as Junior, Elizabeth Canavan as Walter’s former patrol partner Audry, and Liza Colón-Zayas (from TV’s “The Bear”) as a Church Lady, and Victor Almanzar as Oswaldo. There’s also a nice turn by another veteran character actor, Michael Rispoli, as Audry’s detective boyfriend, who exchanges more than a few choice words with Walter.

“Between Riverside and Crazy” won a Pulitzer Prize when it debuted Off-Broadway in 2015 with much of the same cast, but just made the move to Broadway. It’s playing at the Helen Hayes Theater, where the rows of seats are so close together it’s uncomfortable for anyone as tall as I am. Yet the production was so good I quickly forgot my discomfort and enjoyed watching Walter’s. 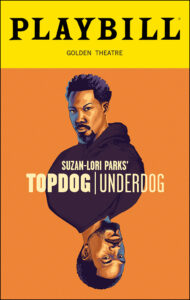 We also saw “Topdog/Underdog,” which won a Pulitzer Prize for playwright Suzan-Lori Parks in 2002. It’s a two-hander starring Corey Hawkins (Dr. Dre in “Straight Outta Compton”) and Yahya Abdul-Mateen II (an Emmy winner for HBO’s “Watchmen”) as brothers whose father named them Lincoln and Booth as a joke — and then left the boys to fend for themselves.

Lincoln, recently released from prison, works dressed as Abe Lincoln (complete with the stovepipe hat, a beard, and whiteface) in an arcade where customers can sneak up and shoot him a la John Wilkes Booth. He knows it’s not dignified work, but at least he gets to sit down throughout his shift, and it’s better than the years he spent scamming passersby with three card monte while keeping a sharp eye out for police. Booth, on the other hand, is a thief who steals whatever he needs to get by while working on his card skills, in the hopes of running his own three card monte crew, preferably with his brother.

Throughout the drama, Lincoln and Booth display the patter they use while running the monte scam — both Hawkins and Mateen sound utterly convincing. But underneath their verbal challenges to unseen marks (“Watch me now, watch me!”) is the desperation of their situation, combined with healthy doses of sibling rivalry.

It’s rare to see two actors commanding the stage as intensely as Mateen and Hawkins, the best pairing I’ve seen since Laurence Fishburne and Sam Rockwell in “American Buffalo” last spring. Director Kenny Leon keeps things moving at such a rapid pace I had no choice but to just hold on for the ride all the way to the denouement. 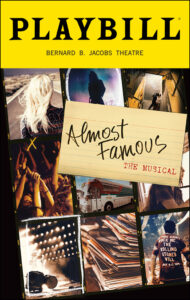 Our third show was “Almost Famous,” a musical adaptation of Cameron Crowe’s semi-autobiographical movie about 15-year-old William Miller’s love for rock and roll, epitomized by his going on tour with the fictional band Stillwater to write a piece about them. Early on, William meets Penny Lane, leader of a quartet of young women who prefer to be known as Band-Aids, seeing themselves as muses rather than mere groupies.

The cast — led by the young-looking Casey Likes (in his Broadway debut) as William and Solea Pfeiffer as Penny — seem like they’re all from a road company of “Hair,” right down to the bell-bottom jeans, peasant blouses, and macramé halters they wear. Chris Wood, who plays Russell Hammond, wears a mustache exactly like Billy Crudup’s, while Rob Colletti does a Philip Seymour Hoffman imitation as rock critic Lester Bangs.

Oh, they’re all energetic as hell, but the songs — co-written by Crowe and Tom Kitt — pale compared to rock classics like Elton John’s “Tiny Dancer,” Led Zeppelin’s “Ramble On,” and Gregg Allman’s “Midnight Rider” that also fill the score. In fact, the only new tune I can remember is the act two opener, “Rock Stars Have Kidnapped My Son,” sung by Anika Larsen as William’s mother. She was so good I almost forgot the character was played by Frances McDormand in the movie.

The most impressive thing I saw in “Almost Famous” was the constant rotation in and out of pieces of the set, including several doors moved around by the ensemble with military precision during one of the big numbers.

As jukebox musicals go, “Almost Famous,” wasn’t quite good enough for me to recommend it. But it’s a moot point, as the production, which opened November 3, has suffered at the box office and thus will close on January 8.