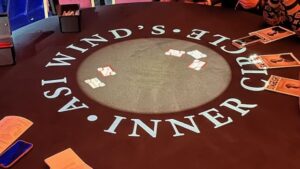 While in New York last week, my wife and I went to see magician Asi Wind perform in a small theater across the street from Washington Square Park. The lobby had a display of watercolors Wind painted of other magicians he’s looked up to, from Houdini to Ricky Jay to Juan Tamariz. Once the show began, Wind sat at a round table surrounded by 13 people, with the rest of us (about 100 in total) on risers that afforded us a great view of everything that unfolded.

The entire show consisted of close-up sleight-of-hand and mentalism with playing cards — but not standard decks. Before the show began, ushers gave each of us a blank card and a marker, instructing us to put our first initial in the corners and full name in the middle. Those became the only props Wind used for the next 90 minutes, and he handled them brilliantly, his hands in constant motion.

Simultaneously, Wind kept up a steady stream of friendly, funny patter (including some jokes about Twitter and Kanye West) and utilizing several members of the audience to great effect. In doing so, unlike too many other magicians, he never acted as if we were an opponent he had to conquer. To the contrary, he drew everyone in, creating an intimacy that had us rooting for him as he pulled off one brilliant illusion after another. That allowed him to act humbly, as if he didn’t just pull off some incredibly difficult moves, leaving him seemingly as amazed as we were.

I’d seen some of the tricks before, but he gave them a new spin. That shouldn’t be a surprise, as Wind has served as a consultant for David Blaine for many years (the show is technically billed as “David Blaine Presents…”), and appeared on “Fool Us” to nothing but praise from Penn & Teller. One of the reasons I knew I had to see Wind is that my friend Jamy Ian Swiss — also a brilliant prestidigitator — raved about him in a NY Times story about this show.

You’ll notice I’m not describing any of the tricks Wind performed. That’s because the written word wouldn’t do them justice, and I believe in experiencing entertainment — magic, theater, movies, TV — with no preconceptions. That certainly applies to “Asi Wind’s Magic Circle,” which will be at the Judson Theatre in Manhattan at least through the end of February.

I couldn’t give it a higher recommendation, and I look forward to seeing whatever Wind does next.