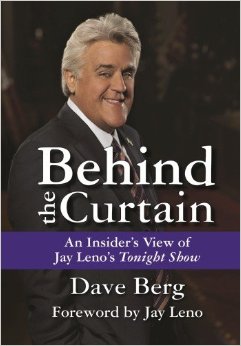 Seven weeks ago, I spoke with my friend Jon Macks about “Monologue,” his book about his years as a writer on “The Tonight Show with Jay Leno.” Now, another Leno staffer, segment producer and talent booker Dave Berg, has a book about his experience on that show, “Behind The Curtain.”

When he joined me on the air, Berg revealed how intense the booking wars were between the Leno and Letterman shows to get the best guests, and how the “Tonight Show” team paid lots of attention to the ratings in determining who was invited back. We also discussed how Barack Obama became the first sitting president to appear on a late night show, who Berg considered money-in-the-bank guests (they might surprise you), and why Leno did not appear as Letterman’s guest towards the end of the “The Late Show.”