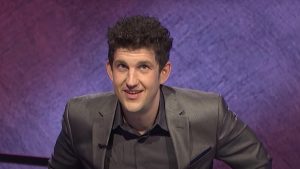 With 23 wins and prize money of $825,801, Matt Amodio is proving that having an extremely wide knowledge base is vital to success on “Jeopardy!” — but only if you can beat the other contestants when it comes to clicking your “signaling device,” as the show calls it. That’s a matter of timing directly related to the pace at which the host reads the clues, and Amodio’s done it now with a whole bunch of different people in that job — Robin Roberts, LeVar Burton, David Faber, Joe Buck, Mike Richards, and now Mayim Bialik.

I feel a little sorry for the contestants who end up on the stage next to Amodio. They’ve all witnessed his uncanny talent for the game and the frustration of the dozens of other players who couldn’t beat him. For all of them, just getting on “Jeopardy!” was a lifelong dream. They’ve studied and practiced at home, paid for the flights and hotel rooms, and psyched themselves up to get a shot at showing off their prowess for the game. But then their dream becomes a nightmare, as they barely participate while Amodio mows them down, too.

All of this and more is covered in a new piece for The Ringer by Claire McNear — whose exposure of Mike Richards’ podcast history of misogyny and idiocy led to his undoing as host and executive producer of “Jeopardy!” If you’re a fan of the show as enthralled by Amodio’s success as I am, it’s worth your time.