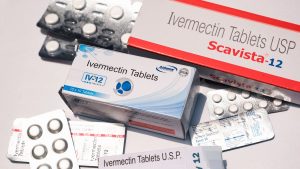 Remember all those vaccine-deniers and rightwing wackos who kept asserting that the anti-parasitic drug Ivermectin was a miracle cure for COVID-19? You knew all along that was nonsense based simply on the people who were insisting it was true. But now, there’s a comprehensive, peer-reviewed study of its effectiveness, which (shocker!) turns out to be not at all.

The Wall Street Journal ran a story Friday, but because that’s behind a paywall, I’m linking to and quoting from a summary by Noah Y. Kim in Mother Jones:

Earlier in the pandemic, some researchers hypothesized that ivermectin could help, after a few studies appeared to show a benefit. However, research consistently failed to validate these earlier findings, and many of the original studies that started the ivermectin craze were discovered to have employed flawed methods. Nevertheless, ivermectin remained a favored treatment among the hardline, anti-vaccine flank of the Republican Party, many of whom continued to take the drug even as medical experts warned that there was no hard evidence it worked.

My colleague Kiera Butler has followed the strange journey of ivermectin from its beginnings as the follow-up act to the discredited Trump-touted malaria drug hydroxychloroquine. In January she wrote that doctors had known for more than a year that the antiparasitic drug wasn’t effective against Covid, and that the FDA had explicitly warned against prescribing it to Covid patients.

But, nevertheless, many physicians continued to prescribe the drug anyway, exacting real costs to the public in the form of sky-high insurance and Medicare expenditures: “What’s more,” Kiera wrote, “anti-vaccine activists often tout ivermectin as an alternative to vaccines — yet many Covid patients who have opted for ivermectin and other untested treatments instead of vaccines have required lengthy and expensive hospital stays.”