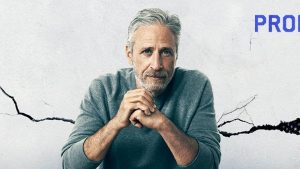 Devin Gordon asks, “Whatever Happened To Jon Stewart?” The resulting piece in The Atlantic is a tone-perfect takedown of the man who will be awarded the Mark Twain Prize tomorrow night. Gordon echoes many of the points I’ve made about Stewart’s going-nowhere Apple TV show, and wonders how someone once so in-touch with the zeitgeist can be so seemingly out-of-touch.

The grand return that Stewart finally launched last fall, The Problem With Jon Stewart, streaming on Apple TV+, is hosted by a guy who took a six-year break from television, and boy, does it show. According to the industry-measurement firm Samba TV, the fifth episode of The Problem With Jon Stewart has been streamed just 40,000 times, which is down 78 percent from the pilot, which aired on September 30, 2021. By comparison, HBO’s episode of Last Week Tonight With John Oliver that same week drew more than 800,000 viewers.

Stewart’s specific genius on The Daily Show was layering facts and complexity into jokes, and stitching punch lines together into George Carlin–esque political riffs. When Stewart was at the peak of his powers, no one could pack more ideas into 22 minutes of comedy. But something has turned. Now he’s the one who seems overwhelmed by complexity and prone to oversimplification. He’s the one who gets called out for fumbling facts, for missing the point, for being out of touch. It’s not just that Tucker Carlson has struck back with a Stewart-proof breed of sophistry. It’s not just that topical comedy doesn’t work as well as it used to. The problem with The Problem With Jon Stewart is Jon Stewart himself.