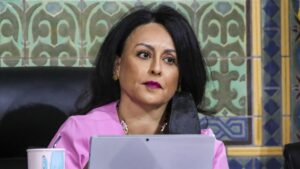 This piece from Frank Bruni:

Nury Martinez, the disgraced former president of the Los Angeles City Council, said that there were “no excuses” for the racist remarks that she made in a leaked audio recording that has outraged residents of the city and appalled people far and wide. She got that much right. Referring to a fellow Council member’s Black child as a little monkey is purely and unequivocally vile.

She said that she was sorry, and she should be, though I always wonder: Sorry for the hate she felt and the hurt she caused or sorry that she’s now in a world of hurt herself?

But Martinez, in her necessary apology, also said something ludicrous — ludicrous but telling. “As a mother,” she confessed, “I know better.”

I’m not a mother. I’m not a father, either. But miraculously, I too know better. And I’m both amused and offended by the notion that having a child typically bestows on someone a greater sensitivity and a keener conscience. If that were the case, this world would be in significantly better shape than it is. It’s chockablock with parents — you can’t throw a binky without hitting one — and somehow bigotry and cruelty are doing just fine.