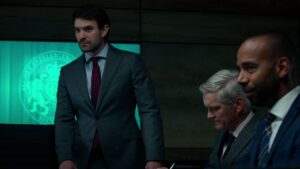 My wife and I decided to try out the new Netflix series, “Treason,” but were disappointed to see it begin with one of those scenes that reveals a major plot point before flashing back to several days earlier to whatever led to that climactic moment. It’s a trope that has become so worn out in the last few years, as every screenwriter and director uses it instead of simple linear storytelling.

The concept, called “in media res,” bothers Daniel Fienberg so much he mocked it in his Hollywood Reporter column:

Fienberg further explains how the problem is compounded when the plot catches up to that big moment, but we don’t remember what we saw at the beginning:

A good in medias res opening needs to be unforgettable. It needs to be something where 20 percent of your brain is always thinking, “Is this the part where the show is going to explain the 50 adorably dead white rabbits?” Otherwise, you’re just using the structuring device as a perfunctory excuse to start with some action in order to buy yourself 40 minutes of subsequent exposition, which is absolutely what “The Recruit” (another Netflix show) and “Treason” are doing.