This weekend marked the death of two celebrities who became tremendously famous, but still had to grapple with vicious racist backlash at the height of the careers. 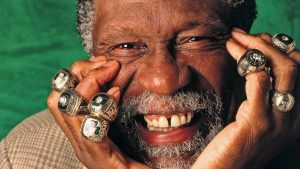 Whenever I’ve been around guys arguing about who the greatest NBA player of all time was, their recency bias is evident in their choices of Michael Jordan and LeBron James. My answer is always Bill Russell, who led the Boston Celtics to 11 NBA titles in 13 years, including 8 in a row, and was named MVP of the NBA Finals five times. Yes, it’s true that Jordan won that award six times, but it’s named after Russell, who died this weekend at 88.

My favorite story about Russell was told by Wilt Chamberlain, whose Lakers provided the greatest rivalry for Russell’s Celtics in that era. Wilt said Bill used to go to his house for Thanksgiving, where he would “eat my food, sleep in my bed and then go out there and whip my butt. And my mother would say ‘Now Wilt, we shouldn’t feed Bill so well next time…'”

Russell had to withstand brutal racism, not just in majority-white Boston, but elsewhere. His home was broken into and defaced. His family received death threats constantly. He and his fellow Black members of a touring NBA All-Star team weren’t allowed to sleep in the same hotel as the white players in North Carolina.

Yet none of that that stopped him from dominating the league, changing the Celtics’ playing style to a much more aggressive pace, and eventually succeeding the legendary Red Auerbach to become the first Black head coach of a major sports team — while still running up and down the parquet floor as a player. If it’s not enough for you that Russell had more NBA championship rings than fingers, take note that he also led the US team to Olympic gold in 1956 and won two consecutive college basketball national titles, including sixty straight games along the way. 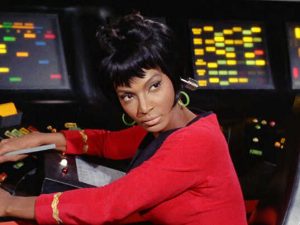 The other notable death of the weekend was 89-year-old Nichelle Nichols, who toured as a singer with jazz greats Duke Ellington and Lionel Hampton, appeared on stage with Sammy Davis Jr. in “Porgy and Bess,” and lost her brother Tom when he committed suicide along with the rest of the Heaven’s Gate cult in 1997.

You probably didn’t know any of that, but you’re likely to remember her for playing Lt. Uhura on the original “Star Trek” TV series and six subsequent movies. It’s a role she almost gave up because of racist harassment. This was long before social media makes things so much worse, but the network was inundated with virulent hate mail — which, to its credit, NBC didn’t share with Nichols. But when she found out about it, she told series creator Gene Roddenberry she was quitting to return to the theater.

Then she met Dr. Martin Luther King Jr. at an NAACP fundraiser in 1966, and he convinced Nichols to stay on the show because Uhura was the only recurring black character on TV who wasn’t a maid. He told her he watched “Star Trek” with his daughters to show them a future where race didn’t matter. Moved by his reaction, she yielded to his wishes and returned to the show.

Like several of her fellow “Star Trek” cast members, Nichols never found another role on the big or small screen to equal the popularity of Uhura. But she later drew pride in knowing that her portrayal of the character inspired several young Black girls, who saw in her dignified performances a dream fulfilled. Among those was Dr. Mae Jemison, the first Black female astronaut. That’s a damned good legacy to leave behind.

If you’ll pardon the corniness, both Russell and Nichols managed to overcome an era full of bigotry to live long and prosper.