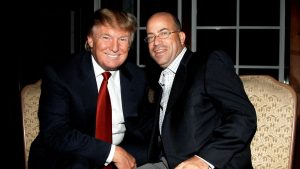 In the Washington Post, columnist Margaret Sullivan offers a stark reminder of ousted CNN boss Jeff Zucker’s years-long enabling and promotion of Donald Trump, not just with “The Apprentice” (while he ran NBC), but the over-the-top coverage afforded to the Liar In Chief by CNN under his watch, too.

I would add that, as the showrunner of “The Apprentice,” Mark Burnett shares a great deal of responsibility for creating the false image of Trump, but Zucker made it worse with his decisions at CNN.

Zucker created Trump the TV sensation, which was the necessary foundation for Trump the candidate. Years later, after moving from NBC to CNN, Zucker recollected very well that Trump was a self-proclaimed “ratings machine” — a rare instance of Trumpian truth-telling.

CNN infamously took his campaign speeches live, sometimes going so far as to broadcast images of an empty lectern with embarrassing chyrons such as “Breaking News: Standing By for Trump to Speak.” You can’t buy that kind of media.

Zucker also brought on the air Trump surrogates who should have had no place on a national news network: people like the bully Corey Lewandowski, the sycophant Jeffrey Lord (who praised Trump as the Martin Luther King of health care) and Kayleigh McEnany, who later became a White House press secretary bad enough to somehow make one pine for Sean Spicer.

When Trump became the Republican nominee for president and started trashing Zucker’s network and staff with invective about its “fake news,” it was too late for second thoughts. By then, the standard had been set. Every Trump utterance became breaking news, and CNN, like many other news organizations, never figured out how to responsibly cover Trump throughout his democracy-damaging presidency.