Book Review: “We Had A Little Real Estate Problem” 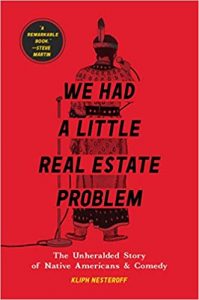 A little more than five years ago, I interviewed Kliph Nesteroff about his book, “The Comedians,” a terrific history of the last century of American comedy, from vaudeville right up to today (you can listen to that conversation here).

Now Kliph is out with a followup book that focuses on Native Americans in comedy. The title, “We Had A Little Real Estate Problem,” comes from the punchline of a joke by Charlie Hill, who is still the only Native American comedian to get a spot on “The Tonight Show.” Kliph explains how Hill’s success laid the groundwork for others to follow, and traces the paths of his predecessors, while acknowledging how tough it still is for Native Americans to get exposure and experience doing standup.

The book delves into the history of how Native Americans were mistreated throughout American history, both in and out of show business. For example, the way movies and TV shows (“F Troop” and many others) for decades used white performers in dark makeup to play “Indians” rather than hiring the real thing. Meanwhile, when Native Americans were hired, they were made to portray racist stereotypes.

Nesteroff digs deep into the legend of Will Rogers, whose Cherokee heritage didn’t keep him from becoming one of the most popular and highly-paid entertainers in the country, even as he used his position to point out the injustices done to First Americans. There are also anecdotes involving Richard Pryor, David Letterman, the Smothers Brothers, and many more. And he includes the amazing story of a comedy team that’s been together for fifty years!

Because Nesteroff is such a good storyteller, “We Had A Little Real Estate Problem” is a terrific read for anyone interested in an expanded history of comedy beyond the common knowledge base. I heartily recommend it.