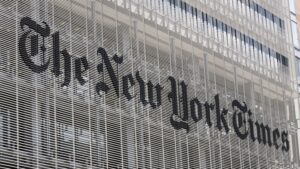 More than a thousand journalists and others who work for the New York Times are staging a one-day walkout today and picketing in front of the company’s building in New York. This comes after 20 months of trying to negotiate a new collective bargaining agreement without reaching an accord with management, which abandoned the discussions yesterday.

Many Times staffers have tweeted this message:

We’re asking readers to stand with us on the digital picket line and not visit any NYT platforms. Read local news. Make something from a cookbook. Break your Wordle streak.

I have never crossed a picket line organized by my union (AFTRA, the American Federation of Television and Radio Artists) or any other, and I hope the Times staffers get everything they’re entitled to. Unions have a long history in my family. My grandmother was a bookkeeper and organizer for the International Ladies Garment Workers Union. My grandfather was in an insurance salesmen local. My parents were both members of the teachers’ union. My brother Seth has been a union activist and to this day advocates on behalf of labor.

Many years ago, in the era when we had to get our landline phones from AT&T — which leased them to customers! — I went to its headquarters to pick up a desk phone (Ma Bell had no retail stores in those days). But when I got there, I encountered members of one of its unions walking a picket line in front of the building. Not only did I not cross the line and go inside, but I spent several minutes talking to them about the issues they faced, and then talked about them on my radio show the next day, urging listeners to respect the picket line, too. Getting a phone could wait.

In that same era, I refused to go into a movie theater whose projectionists were walking a picket line outside. I can even remember when Seth and I were in south Florida and, having never seen jai alai in person, drove to a fronton in Miami to see the sport for the first time. But when we arrived, workers were on strike. Disappointed as we were, we turned the car around and left. To this day, I’ve still never seen the game played.

In all those instances, I felt my refusal to do business with those operations at the time might have some impact on their bottom line, particularly if large numbers of others acted as we did.

However, I was at first a bit confused by the Times staffers’ request because everything that appears in the newspaper today was written, edited, and designed yesterday (or earlier). It seemed to me that in order to have any effect, the boycott should take place tomorrow, when we’ll see the what a globally-respected news outlet can produce without its team of world-class professionals.

But I quickly remembered that the Times is not merely in the business of publishing today’s news tomorrow. In a 24-hour information society, it is constantly providing content, day and night, through its app and website and push notifications and social media. The print edition may come out the next day, but much of what’s in it has already been distributed digitally by then.

Thus, I’m going to honor the union members’ request and not cross their virtual picket line today. That means I won’t read, click on, or avail myself of any of the New York Times services online. I’ll forego the crossword, Wordle, and Spelling Bee. Though I also subscribe to the print edition, I’ll pick it up from the end of my driveway in the morning and carry it right to our recycle bin (if I’d known about the walkout earlier, I would have suspended delivery for the day).

This is a particularly tough time to be in the news business. Outlets from CNN to NPR to Gannett to The Washington Post have been making drastic cutbacks, while so many smaller papers and content providers have merely vanished from the scene after readership dropped dramatically and ad revenue dried up.

I have no idea if this virtual boycott will provide any impetus for management to accede to enough of the union’s demands to settle on a new contract, but I’m happy to do my tiny part in trying to make it happen.

Besides, if you join me, you’ll have even more time to browse my posts on this site!