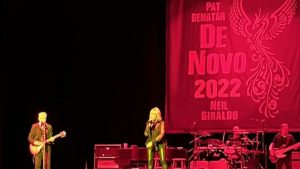 The first time I saw Pat Benatar perform was in November, 1980, at The Palladium in New York City. She had roared onto the scene that year thanks to her smash hit, “Heartbreaker.” Since she’d grown up on Long Island, radio stations in the area — including WRCN/Riverhead, where I was Program Director and morning co-host — played the song a ton, along with “We Live For Love” and her cover of John Mellencamp’s “I Need A Lover.”

After the show, I went backstage with my portable cassette recorder and asked her a few questions, none of which I remember today. She was still charged up from playing such a high-visibility venue, affable, and happy to talk. She recognized our call letters and was grateful we’d been out-of-the-box supporters of her debut album.

During the show, one thought kept running through my head. It was the same thing I’d had while watching Linda Ronstadt in concert a few months earlier: “How does such a huge sound come out of someone that small?” Like Linda, Pat was a powerhouse singer with a voice that could have filled The Palladium even without amplification.

Her career grew exponentially over the next decade, with no less than a dozen big hits, and she became a mainstay on radio and a recurring presence on MTV once it launched the following summer. Although I played her music on the air a lot during that time, I didn’t see her perform again for 42 years.

Monday night, Martha and I went to The Factory (the terrific new concert venue about 15 minutes from our house) to see Pat and her husband/guitarist Neil Giraldo. My wife summed up the show in four words: “Pat’s still got it!” Her voice remains strong and she still hits the high notes in songs like “We Live For Love.” She looks great, too, with a blonde/gray bob haircut and tight leather pants she was seemingly poured into. Not bad for a 69-year-old.

Because Pat and Neil have been together for more than four decades (and he’s co-written and produced a large number of songs in her catalog) he gets co-billing on tour — and deserves it. His guitar work complements Pat’s vocal pyrotechnics so well they only need a bass player and drummer behind them.

Pat purposely left out “Hit Me With Your Best Shot,” because she felt it inappropriate to sing in an era marred by so much gun violence. But she touched on almost her other hits and, in the encore, sang The Beatles’ “Helter Skelter,” matching the rawness and energy of Paul McCartney’s original. For her finale, she said, “Here’s the song that started it all,” as the drummer pounded out the into of “Heartbreaker.” For a nice extra touch, she sang a couple of verses of Johnny Cash’s “Ring Of Fire” in the middle.

The first qualification for being inducted into the Rock and Roll Hall of Fame is having 25 years pass since your debut album. This year marks 43 years for Pat, who will finally be enshrined in the 2022 class this November.

The honor is well deserved. And I’m happy to echo my wife’s sentiment: Pat’s still got it.