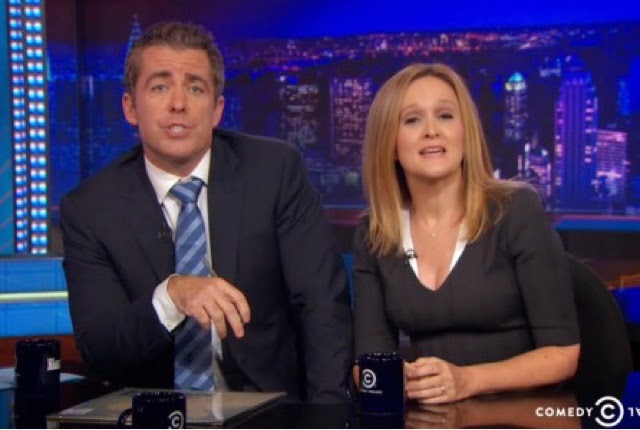 Jason Jones announced this week that he’s leaving “The Daily Show” to do a sitcom for TBS. That’s good news for my wife, who can’t stand Jones because most of his segments are essentially dick jokes. In fact, we’re both bothered by the fact that Jon Stewart still allows “TDS” to dip into the dick joke well far too often. It’s not that we’re prudish at all, it’s just that we perceive Stewart (and most of his other correspondents) as better than that.

The first stories of Jones’ impending departure all said that his wife, Samantha Bee, would also leave “TDS” to help write and co-executive-produce the sitcom. Now a Variety story says otherwise. That’s also good news because Bee has been one of the best contributors to the show for nearly a decade.

A friend who saw that Bee was staying wondered if this might mean she’ll replace Stewart in the anchor chair when he departs later this year. Of all the correspondents remaining on the show, Bee not only has seniority, but would seem best-suited for the job (Jessica Williams has already said she’s not up for it, Jordan Klepper is probably still too new to get it, Aasif Mandvi isn’t around much anymore, and none of the other correspondents is likely in the discussion).

But I don’t think they’ll put Bee in the anchor chair.

Taking over for Stewart will require an enormous amount of work, which Bee can’t commit to if she’s also helping Jones get his sitcom off the ground. There are only so many hours in the day, and the person who replaces Stewart will have to be singularly-minded about the task of not just anchoring, but running “The Daily Show.” So, expect Bee to continue doing pieces and occasional desk spots with whoever the new host is, but not sitting in The Big Chair.

So, who does that leave to replace Stewart? I have no idea, nor does anyone else. They could go with someone like John Fugelsang, who’s a comedian and a broadcaster and a liberal, three qualities that make him similar to Stewart. Maybe they move Chris Hardwick up from his “At Midnight” show, but his sensibility might not match what “TDS” now stands for. There are plenty of podcasters who’d love a shot at a national TV show, but again, which of them would fit into the “TDS” aesthetic?

It would be nice if they could find a woman who could do the job (since the other late-night slots that have opened up in the last year have all gone to more men) but who would that be? Forget about Tina Fey or Amy Poehler — never gonna happen. It won’t be Chelsea Handler, whose tone isn’t right for “TDS” (she has a deal with Netflix, anyway). It won’t be Kathy Griffin because, fer chrissake, I still wanna watch this show. Perhaps Comedy Central is talking with radio talk show host Stephanie Miller, a progressive whose LA-based morning show is syndicated to a bunch of stations around the country. She’s funny, topical, and edgy, so she should at least be in the discussion.

Bottom line: I don’t know, and I doubt Comedy Central knows yet. They have a few months to figure it out, but what all of this speculation proves most of all is that Jon Stewart will be a very tough act to follow.