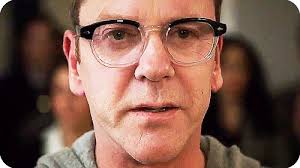 I liked the first episode of ABC’s “Designated Survivor,” in which Kiefer Sutherland plays Tom Kirkman, the Secretary of Housing and Urban Development, who suddenly becomes President after everyone else above him in the line of succession is killed when the US Capitol is bombed during the State Of The Union address.

That’s a compelling start to a story, and one that we’d joked about in our family when my brother, Seth, became Acting Secretary Of Labor in 2013. During his six months in that office, he went to cabinet meetings, had a large security detail that protected him as he traveled, and was officially the eleventh person in line for the presidency.

I asked Seth how he felt about that, and he told me that if I ever saw him on TV from the Oval Office telling the world that everything is okay, well, everything is most definitely not okay.

Which brings me to the end of the “Designated Survivor” premiere, when Sutherland sits down and is about to do exactly that — reassure the country from behind the presidential desk. Just before airtime, his speechwriter (played by Kal Penn, who gave up acting for a few years to work in the Obama administration) tells Sutherland to remove his glasses because “they don’t look presidential.”

That’s when I called bullshit, for two reasons: 1) there’s nothing wrong with a middle-aged man needing glasses; and 2) when the man is about to make the most important speech of his life off a teleprompter and needs to be confident and authoritative, you can not take away the glasses that make it possible for him to read that speech!

I’m looking forward to next week’s episode, in which the presidential optician has to make an emergency house call.