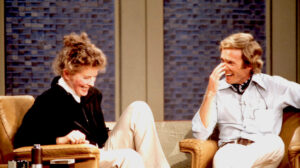 Dick Cavett was back on my show to talk about his classic interviews with Katharine Hepburn, Alfred Hitchcock, and Groucho Marx. They’re included on the collection on his new DVD, “Hollywood Greats.”

Listen to the conversation here. You can also listen to my earlier conversation with Dick about the shows he did with John Lennon and Yoko Ono.

Side note: when we booked this interview, I was told that Dick was on a very tight schedule and we had to wrap things up by a certain time. Since I’ve been on the other side of that — being the next person in an interview tour, waiting for the previous host to finish so I can start on time — I try to be respectful of these requests. However, sometimes, the guest is having such a good time, or has more stories to tell, that they don’t seem to care about the schedule. As you listen to the interview, you’ll hear me try to bring things to a conclusion a couple of times, but Cavett just wants to keep going — and I wasn’t going to cut him off until I absolutely had to hit a commercial break.