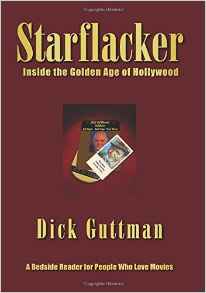 Dick Guttman has been a Hollywood publicist for over six decades, working with stars like Barbra Streisand, Clint Eastwood, Groucho Marx, Audrey Hepburn, James Mason, Alfred Hitchcock, and Arnold Schwarzenegger. He’s written about his experiences with those stars (and many others) in his book, “Starflacker: Inside The Golden Age Of Hollywood,” which we talked about on my show.

I asked him to start off with a story about a Michael Caine death rumor, then we moved on to Elizabeth Taylor, Paul Newman, and Jay Leno. He discussed working for studios as opposed to stars, dealing with paparazzi, and the media’s role in a star’s public image. I also asked whether it’s harder to be a press agent in the era of Facebook, Twitter, and TMZ.

You can read a few chapters of Dick Guttman’s “Starflacker” for free here.