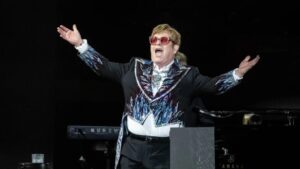 It reminded me of 40 years ago when Martha dragged me to see him for the first time. It was an era when Elton’s music had softened, and his songs were bigger hits on Adult Contemporary radio stations than the Album Oriented Rock station where I did the morning show (WHCN/Hartford). However, his show was exactly the opposite, his piano playing was spectacular, and I was really impressed.

We didn’t see him again until 2008, when we took our daughter to see Elton and Billy Joel on their Face To Face tour. By then, I’d seen Billy more than a dozen times, and since he hadn’t written any new songs since 1995, his part of the show didn’t surprise me. But when Elton hit the stage, I had the same reaction I’d had 25 years earlier. Those feelings were revived yet again when I watched this Dodger Stadium show, which marked his last concert date in the US before he retires.

He was accompanied by three musicians he’s worked with since the early 1970s: Davey Johnstone on guitar, Nigel Olsson on drums (one of the few drummers I’ve seen wear a tie on stage), and percussionist Ray Cooper (a doppelgänger for Slugworth, the villain from the original Willy Wonka movie). They’re still on their game, too.

I wrote Friday about seeing Daryl Hall and Todd Rundgren fail to hit their falsettos repeatedly. In Elton’s case, at 75, he knows he can’t hit the high notes anymore, so he doesn’t try — but his piano playing is still top-notch. It’s amazing his hands haven’t been racked with arthritis or rheumatism.

I got a kick out of Elton playing “Burn Down The Mission,” “Have Mercy On The Criminal,” and “Levon” — three tunes we referred to as Deep Cuts in my AOR days — and bringing out Kiki Dee to duet on “Don’t Go Breaking My Heart.” I don’t like live performances which sound just like the recorded version, so his extended workout on the piano keys on “Rocket Man” was a pleasure to experience, too.

Elton has always been the consummate showman, and this concert — which ran three hours — was no exception, a first-class finale to a grand career.