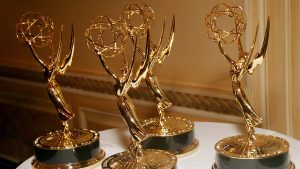 Since the Emmy Awards nominations were announced Tuesday morning, I’ve seen the usual number of professional TV critics offering their lists of snubs, surprises, and predictions for who and what the winners will be in September. But I’ve also seen quite a few vitriolic comments on Twitter and Facebook along the lines of, “No one’s going to watch because America hates Hollywood’s left-wing bias!”

Nonsense. There’s no evidence of the entire nation turning away from all things television. In fact, during the pandemic, viewing levels in total were up, though individual shows no longer attract the masses.

Ratings for the Emmys will undoubtedly be lower again this year, but the reason is not political. It’s simply a function of the fact that there’s no such thing as common viewership anymore. Outside of NFL games, no single show on broadcast, cable, or streaming services captures the country’s simultaneous attention anymore. Even the top-rated shows (“NCIS,” “Young Sheldon,” “This Is Us”) only draw audiences in the 12-15 million range. Compare that to a mediocre sitcom from 30 years ago, “Who’s The Boss,” which averaged 33 million viewers. Even at those numbers, the show was never the subject of water cooler talk the next day. Neither are the modern ratings winners.

Shows on the traditional broadcast networks (ABC, NBC, CBS, FOX) still dwarf the audiences for the vast majority of “hits” on Netflix, Hulu, Prime Video, Disney+, or any other streaming network you care to name. “Ted Lasso” is considered a smash for Apple TV+, but that’s a small universe, with a subscriber base nowhere near large enough to create a big buzz. The reality is that viewership is now spread around to a much greater extent, and because so much of it is on-demand, the majority of us aren’t watching anything at the same time.

That’s different than just a few years ago, when the “Breaking Bad” finale had millions of people talking the next day (and causing many of their work colleagues to plead, “Don’t spoil it! I recorded but haven’t watched it yet!!”). The same applied to shows like “Game Of Thrones,” “The Walking Dead,” or the Michael Jordan “Last Dance” documentary on ESPN. Even then, those supposedly hyper-popular cultural touchstones were only pulling single-digit ratings in the fours and fives. By comparison, look back to another lousy show of 30 years ago, “Baby Talk,” which only lasted a season, but averaged a 14.3 rating!

In 2021, with so many eyeballs spread around to so much content across so many outlets, there is no single show dominant enough to make people tune into the Emmys to see if it wins (or watch its stars walk the red carpet). Just look at last year, when “Schitt’s Creek” won Best Comedy and several other awards — while most of America had never heard of it or knew which platform it was on. The same went for the Best Drama winner, HBO’s “Succession,” which nabbed four statuettes and was arguably more popular, but not nearly enough.

In a landscape where more than 95% of the audience has never seen or heard of your winners (let alone the losers), the expectations for the shows that award them should be lower, too. And with a ceremony that will still be under pandemic protocols, meaning most of the seats will be empty and some nominees will attend virtually, there’s even less reason to watch.

But it’s not because of politics. The real reason is math.