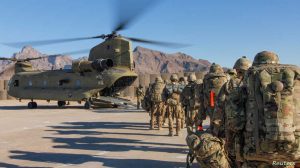 In 1999, I had Mavis Leno as a guest on my radio show. She didn’t come on to talk about her husband. At the time, she was a spokesperson for The Feminist Majority, and the topic was the dire state girls and women in Afghanistan were being forced to endure under the Taliban.

They weren’t allowed to attend school. They could not be doctors, which presented a problem when they got sick, because they were not allowed to speak to male physicians without the woman’s husband, father, or brother being in the room. Oh, and those male doctors couldn’t touch the women, either. In essence, the Taliban’s extreme fundamentalist Islamic laws discriminated against women in Afghanistan in every way.

At the time, I thought it would be a good idea for the big boot of the United States to reach out and squash the vermin who treated half the population so severely. By that, I meant our military should engage and force regime change in Afghanistan to some form of government that respected human rights.

Two years later, Osama Bin Laden’s followers hijacked four jets inside the US on 9/11. We all know the record of that day. When it became clear the terrorists had trained in Afghanistan with the knowledge and permission of the Taliban, it was only a matter of weeks before the US military did engage, taking out those Al Qaeda camps and eventually killing Bin Laden. The missions were all about revenge and preventing a similar attack, not about how to make Afghanistan a more enlightened nation.

That was twenty years ago. Since then, it’s hard to know what the presence of America’s armed forces in Afghanistan has accomplished, but it certainly doesn’t include getting rid of the Taliban. They’re still there, terrorizing their own people. Meanwhile, 2,312 US soldiers and more than 40,000 Afghan civilians have died. Whatever the mission was, it can not be described as “accomplished.”

Last week, President Biden announced that all of our remaining troops will leave Afghanistan on 9/11 of this year. Like our experience in Vietnam (the previous record-holder for “forever war”), the US has wasted vast resources — human, materiel, and financial — running around a Mobius strip with very few positive milestones. Naturally, the military-industrial complex and the usual political hacks raised a ruckus after Biden’s announcement, claiming the move would ennoble the Taliban and threaten America’s national security, but I haven’t heard even one of them offer a better idea or any suggestion of when it would be acceptable to leave.

As for threats to our homeland, I’m much more worried about domestic terrorists: conspiracy-theorists, Christian extremists, and white supremacists ready for an armed revolution, willing to take on their fellow Americans to enforce their skewed view of what our country should be. They’re more akin to the Taliban than they’d be willing to admit, and they have plenty of elected representatives in Congress and statehouses across the country to advance their dangerous agenda legislatively, too. They are doing more damage to our nation than the Taliban, Al Qaeda, and Isis could even conceive of.

History has proven that while Mavis Leno was right about the horrible conditions faced by girls and women in Afghanistan, I was wrong about the impact the United States can have on the situation, particularly at the point of a gun. As this nation’s foreign policy has proven time and time again — notably in the Mideast — it is practically impossible to impose and/or restore freedom from afar.

Especially when we can’t even guarantee it within our own borders.