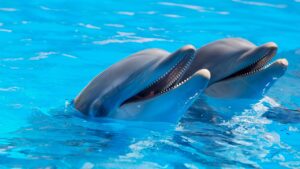 Last May, I wrote about a Daily Beast story headlined, “Putin Deploys Top-Secret Attack Dolphins in War on Ukraine.”

It reminded me of the 1973 movie, “Day Of The Dolphin,” written by Buck Henry, directed by Mike Nichols, starring George C. Scott and Trish Van Devere as marine biologists teaching dolphins (Alpha and Beta, a/k/a Fa and Bea) to talk and interact with humans. The swimming mammals were taught to say things like “Fa loves Ma” and “Fa get Bea.” The story got stupid when they discovered some bad guys wanted to train the dolphins to carry and attach explosives to naval vessels, including in an attempt to assassinate the President of the United States.

I thought about “Day Of The Dolphin” again yesterday while reading an article by Carolyn Wilke in the Science section of the NY Times about how dolphins have had to adapt to noises in the water created by humans (shipping, oil exploration, etc.). In order to test this, scientists trained two dolphins (Delta and Reese) to swim to different places in their enclosure and push a button within one second of each other. When sounds were piped in through underwater speakers, Reese and Delta compensated by amplifying their whistles and turning their bodies toward each other, but the louder the audio, the less effective the communication.

That’s interesting, but it’s the training of the dolphins to complete tasks under water that sounds like it’s right out of Henry’s script. And don’t believe for a minute that the US isn’t working on deploying attack dolphins, too — no matter how often one of them says “Fa Loves Pa.”