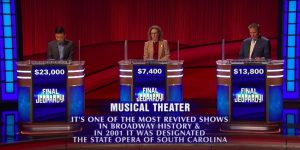 As a longtime “Jeopardy!” viewer, I’m regularly impressed with the breadth of knowledge many of the contestants have retained and can recall at a moment’s notice. But I’m also baffled by the inability of some of them to wager correctly when it comes to Final Jeopardy.

On “Jeopardy,” runners-up don’t get to keep their winnings. Instead, second place earns $2,000 and third place gets $1,000. Considering they have to pay their own expenses to get to Los Angeles to be on the show in the first place, that extra thousand dollars can make a big difference.

The most frequent bad-bet culprits are the ones in third place at the end of Double Jeopardy with seemingly no chance to win the game. Too often, those players wager everything, get it wrong, and end up with zero. But in many cases, betting nothing can increase their payout.

In this scenario, C should always bet zero. Then, if A & B go all in but answer incorrectly, C’s four thousand will be the highest total. If A & B go all in but only one of them answers correctly, C will move up to second place and take home an extra grand! Whether or not C answers Final Jeopardy correctly doesn’t matter, since both the risk and reward have no value. You could pull a Johnny Fever and write, “What is BOOGER?” and still get a nice check.

Not enough players in last place take advantage of this opportunity.

Everything would have been fine if Robert had gotten FJ right. When he didn’t, his total dropped to 18,399. Meanwhile, Steve knew what Robert’s wager had to be, so he knew that if he was right and Robert was wrong, he’d win the game if he also wagered correctly. So, Steve bet 4,601, got it right, and ended with a total of 18,401, making him the winner by two dollars.

I have seen several people online criticizing Robert for making a bad bet, but he didn’t. If he had wagered 4,600 instead of 4,601, he wouldn’t have had enough to cover Steve either way.

Robert’s error was in not knowing the correct response for the FJ clue: “It’s one of the most revived shows in Broadway history & in 2001 it was designated the state opera of South Carolina.” Steve (and Aleithia) both got it right: What is “Porgy and Bess?” But Robert got it wrong: What is “South Pacific?”

Then it was all about the math, which unfortunately had Robert trapped in a situation he couldn’t avoid — unless he’d racked up more points during the game and put up a total that Steve couldn’t surpass, regardless of what happened in Final Jeopardy.

Incidentally, Aleithia could have bet any amount between 1,800 and 7,399, because if she got it right (which she did) and Steve got it wrong, she would have moved up to second place. He would’ve ended up with 9,199 while she’d have finished with 9,200 at the low end and 14,799 on the high end. She couldn’t catch Robert either way, but she played it right in the hopes of a step up.

One last thing. Despite the disbelief in Mayim Bialik’s voice when it happens, winning “Jeopardy!” by a dollar or two is not an unusual nor unforeseen circumstance. In fact, it happens regularly, and has for decades.

But no one else seems to notice the expensive miscalculations being made so often by third-place contestants.