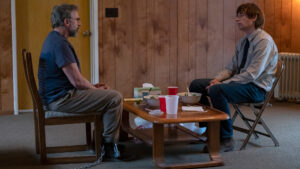 We’re only four episodes in, but I’m really enjoying the Hulu series, “The Patient.” It’s about a serial murderer (Sam, played by Domhnall Gleeson) who kidnaps his therapist (Alan, played by Steve Carell) and keeps him locked in the basement until the doctor can cure the patient of the urge to kill. Gleeson plays Sam with just the right scary, manipulative, sociopathic qualities — and he has the American accent down despite being Irish. Carrell, meanwhile, gives a perfectly-modulated performance as Alan, who’s trying to survive a horrifying experience while honestly trying to find a way to help his patient. I can’t wait to see how the series plays out.

Here’s another show I recommend: “Black Bird” on Apple TV+. It stars Taron Egerton (who shined in “Rocketman”) as Jimmy Keene, a felon offered the chance to have his sentence commuted if he’ll move into a facility for the criminally insane and befriend another prisoner who’s suspected of murdering multiple girls as young as 13. As good as Edgerton is, it is Paul Walter Houser’s performance as the creepy Larry Hall that makes this limited series pop off the screen. Houser has made a career of late by brilliantly playing oddballs in movies like “Richard Jewell,” “BlacKkKlansman,” and “I, Tonya.” You can add “Black Bird” to that list, but I look forward to seeing Houser break out in a role where his character is a little less ominous.

In Buffalo, kids had a half-day of school yesterday because the Bills were going to play their home opener on Monday Night Football. Classes ended before noon even though the game didn’t start until after 7pm. I know they love to tailgate in western New York, but — as my wife asked — considering how late MNF games run, wouldn’t everyone have been better served with schools starting a couple of hours later today instead?

Every time I watch the NFL, I think of the young boys and girls viewing the game and dreaming that someday they’ll have a job where a low-level employee comes over and squirts water into their mouths several times a day.

And finally: the COO of Beyond Meat was arrested this weekend for biting the nose of another man in a traffic dispute in parking garage. No word on whether he thought the nasal flesh tasted like hamburger.