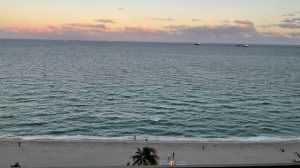 When my wife and I told friends we were going to spend a few weeks in south Florida to get away from winter weather at home, some of them tried to make us re-think that decision. They said, “You’re going to Florida? That state’s doing a horrible job of handling COVID, with a governor who doesn’t believe in science!!” I had to remind them that we live in Missouri, a state where it’s illegal to use data and facts to create public policy. But each week, I checked the county-by-county statistics and found that Broward (where we were vacationing) actually had lower coronavirus case numbers than St. Louis.

Besides, while our home metro suffered through a slew of days of below-freezing temperatures — as well as several snowstorms — we were enjoying temperatures 60 degrees warmer. With nothing to shovel.

That meant we were able to go to the beach or pool or for long walks almost every day, as well as engage in one of my other favorite warm weather hobbies: watching very white people turn into very red people. There was one family so white, if Jim Gaffigan spotted them he’d say, “You’re too pale!” Edgar and Johnny Winter would rejoice at finding humans with less melanin than them. Tucker Carlson would be so impressed with their whiteness he’d promote them every night.

This family apparently hadn’t heard about sunscreen with an SPF over 7. I swear, the father of the foursome got so red so fast, I thought he might burst into flames before our eyes.

One day, I had lunch with a friend who recently moved from southern California to south Florida. When I asked why, he explained that he and his wife had more family and other connections in that area than they’d been able to establish in more than a quarter-century on the west coast. Besides, he said, “I’ll never have to worry about my house burning down.” Sure, he said, hurricanes could be a problem in that part of Florida, but at least they’d get a couple of days warning, unlike the wildfire that started quickly one day near their home in a Los Angeles suburb and came too close for comfort. They didn’t have to evacuate, but from then on, they kept “Go Bags” packed and near the front door.

The one thing California and Florida have in common that St. Louis doesn’t is constant traffic jams. At pretty much any time of the day, driving east or west means having to stop at an interminable series of red lights, while the north-south arteries like I-95 and Route 1 could be reclassified as parking lots during rush hours. There are simply too many people and vehicles in the area with not enough infrastructure, which is why we were glad to stay in a hotel within walking distance of restaurants we liked.

The highlight of every trip we take to south Florida is always the Atlantic Ocean. Every time I walk to the edge and into the waves, I say, “Hello, old friend!” Then, if conditions are calm enough, I go out past the breakers and swim parallel to the shore. I rarely spot any wildlife other than seaweed, but this time I did see a baby stingray, about 18″ long and wide. I swam along with it for a while, but then one of us had to come up for air, and when I re-submerged, it was gone.

Even when we didn’t go to the beach, we loved opening the curtains in our hotel room and looking out at the Atlantic’s magnificence — a sight I never get tired of. But this year, to our surprise, we observed cruise ships and empty cargo freighters docked a mile or two offshore. I suppose they hung out there rather than paying dock fees while waiting for their next load of tourists or cargo, but after all the stories we were fed about supply chain problems and boats full of containers forced to wait days before unloading, we didn’t see a single full ship — only the empty ones.

Lastly, there’s a billboard along I-95 advertising an upcoming Trump rally where he will speak, along with several members of his extended crime family. I also heard a radio commercial plugging it, with the announcer saying plenty of tickets are available for as little as $9. I know that attendance at his cult showcases has dropped off precipitously, but an admission price of nine dollars? I’m gonna pay more than that for parking when I go see Chris Rock in a couple of months. Nine bucks to see a former president of the United States? I think Obama’s podcast is more expensive. Nine smackers to listen to yet another recitation of Trump’s lies, exaggerations, and outlandish claims?

I’d rather grab my Go Bag and get out.