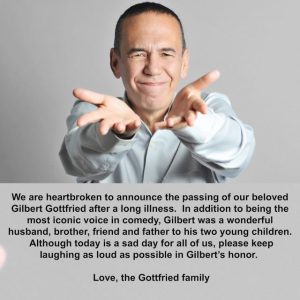 I can’t claim to have known Gilbert Gottfried, who has died at age 67. He only made one short appearance on my radio show, which I’ll get to in a moment. But the first time I saw him was at Catch A Rising Star, the legendary comedy club on the upper east side of Manhattan.

This was in the late 1970s, when Gilbert was beginning to establish himself as a comedian who could drive a crowd wild. Sometimes, that was good, because he and the audience were on the same wavelength, and they would go wherever he took them. That usually meant obscure imitations — including the best James Mason I’ve ever heard — oddball stories, a few things that more than bordered on tasteless, and a mix of prepared material and bits that seemed to occur to him right then and there.

I also witnessed nights at Catch when the dynamic was totally different. When Gilbert sensed that the crowd wasn’t with him, you could see a switch click in his brain that was labeled, “Now, I’m going to torture you.” That meant he threw everything he had at them, often staying on stage well past the 15-20 minutes most stand-ups were allotted. It was as if he wanted to see if he could make things so miserable that the onlookers’ pendulum would swing back the other way. On a few occasions, I witnessed him do exactly that, followed by a big round of applause — from everyone except the comic who had to follow him, who suffered even more if Gilbert lost the crowd and couldn’t get them back.

Several years ago, I was doing my midday radio show at KTRS with another comedian as my in-studio guest. I can’t remember who it was, but the conversation wasn’t anything special. The broadcast studio had big picture windows overlooking the interior of an office building/indoor mall, and as I looked out, I spotted Gilbert slowly walking by and looking in. He was headlining at The Funny Bone, which was just down the escalator from the station. Their comedians were always put up in a hotel at the other end of the mall, so I wasn’t shocked to see him. Knowing I could get more out of him than whoever I was talking to, I motioned to Gilbert to come in and sent my producer out to show him the way while I took a quick commercial break.

As Gilbert shuffled in, I went over and introduced myself, asking if he wanted to join us for a few minutes. He responded shyly, “Sure, if you want me to,” as if he were the most mild-mannered human on the planet. He sat down next to my other guest and explained that he was on his way to get some lunch. I told him I wouldn’t keep him long, then watched and listened as he transitioned from this quiet soul to the brazen, outspoken comedian who was fearless onstage.

I started off by asking him about the time he’d spent at Catch A Rising Star more than 30 years earlier, and he was very honest and forthcoming in his answers. Then I commented on his James Mason impression, and mentioned one other he’d done that always stuck with me. It was the character actor John McGiver, who had appeared in dozens upon dozens of movies and TV shows when both Gilbert and I were young. 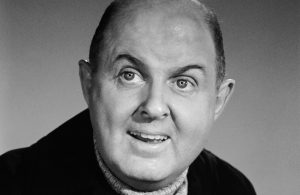 Mason and McGiver’s voices were nothing like Gilbert’s speaking voice, but he nailed them, so I pressed him to do his version of the older Groucho Marx and his face lit up. Once again, he was pitch-perfect and seemed to enjoy being asked to do those imitations rather than yet another discussion of the time he told The Aristocrats joke at a roast of Hugh Hefner three weeks after 9/11. I knew that he’d already talked about that event ad nauseam, so I didn’t even bring it up. Instead, we went off on a tangent about our mutual love of the Marx Brothers, particularly their earlier movies.

Sadly, I don’t have any audio from Gilbert’s drop-in appearance in my archives, or I’d share it with you now. I do remember that the other comic never got another word in, but laughed heartily at what Gilbert did. Unfortunately, the segment only lasted around 10 minutes before my show was over and I had to say goodbye to both of them.

More recently, I’ve been an avid listener of “Gilbert Gottfried’s Amazing, Colossal Podcast,” in which he and Frank Santopadre interviewed scores of showbiz legends from an earlier era. It was Frank who booked, researched, and guided the guests through the interviews, but whenever Gilbert had an opportunity to do one of his obscure impressions or ask questions about an embarrassing incident involving some other celebrity, he didn’t hold back — especially if there was an opportunity to mention Milton Berle’s prodigious endowment.

Gilbert never touring comedy clubs, making TV appearances, doing animation voice work, and being featured in a very nice 2017 documentary simply entitled, “Gilbert.” I’m disappointed I didn’t have the opportunity to spend more time with him, and sorry to hear that his unique voice has been silenced.