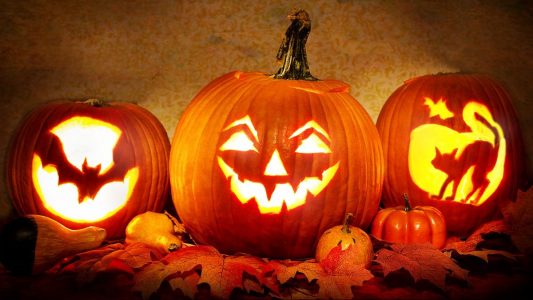 It’s Halloween time, but the excitement meter is already pinned at our house. And that’s before my seven-year-old daughter goes into sugar overload from her candy bounty to come.

It’s for her sake that Halloween is a big deal at our place, and there are lots of important decisions to be made. She had her costume planned months in advance, and while always clever, never gets too exotic, expensive, or age-inappropriate (she’s too young to want to be Angelina Jolie in “Tomb Raider”).

Then, just as the calendar turns to October, she starts bugging us to go pick out the Official Harris Halloween Pumpkin. Make that plural — this year, we also have to have a backup pumpkin, in case there’s some sort of Jack O’Lantern mishap. Gee, where’d she get that idea?

After making her big orange selections, she insisted that we carve right away, but my wife and I were able to table that discussion for awhile by explaining the concept of how fruit can go from pleasantly raw to unpleasantly rotten when left exposed for a fortnight or two.

In the meantime, we kept her busy festooning the house with a boxful of Halloween decorations. Yes, we erred slightly by allowing her to apply ghoulish stickers to the windows — she applied all of them to the same kitchen window pane and then asked for more so the room wouldn’t look lopsided.

By the weekend before H-Day, there was no more delaying. It was time to dig into the pumpkin. Fortunately, our daughter had designed an intricate drawing of exactly what the Jack O’Lantern must look like, complete with cartoon word balloons saying “Boo!” She got these ideas from a pumpkin carving kit that my wife – in a moment of total insanity – found at a local store. One look at the renderings on the cardboard and I laughed for a half hour.

You know the way the pictures of food on a restaurant menu never look anything like the actual dish that’s served to you? The same is true of these pumpkin carving samples.

The cruel people who produce this product try to convince you that you have a chance of success by including little carving tools to work with. In my house, the only way the final product would come close to resembling the illustration is if they also provided a professional pumpkin carver (there must be people who specialize in that, in a world where you can make a good living forming chopped liver into a turkey shape and carving ice into giant swans).

Let’s just say we’re not good at the visual food arts. It doesn’t matter how extravagantly it’s designed — our Jack O’Lantern will always end up with triangle eyes, a triangle nose, and a mouth with three top teeth and two bottom teeth. You can hope for Pumpkin Van Gogh, but we’ll just end up with both pumpkin ears missing. Nevertheless, once that candle was placed inside, my daughter gave us a big, satisfied smile (which I’m happy to say, contains more teeth than the Jack O’Lantern).

When it comes to trick or treating, I’m happy to say we live in a neighborhood where lots of kids are out doing the door to door routine, usually accompanied by a few Dads, including me, and none of us bothers with a costume of any kind.

I’ve always been creeped out by adults who get too into their Halloween costumes. You’ll never see me dressed as Frankenstein, or Austin Powers, or Tony Soprano. Even in college, when I attended a costume-mandatory party in the girl’s dorm, I hated the concept so much that I just strapped a colander to my head and went as an upside-down bowl of pasta. Two things should be apparent from that story – one, alcohol was involved in my last minute costume choice, and two, I didn’t spend much time in the girl’s dorm after that.

Back to the food. The part that we are good at is choosing which candy we’ll give away. There’s a delicate balance to be achieved here, because you want to get something good enough that you’ll enjoy eating the leftovers (mini Mr. Goodbars, tiny Twizzlers), but not so tempting that you down them before the doorbell even rings on the 31st (orange cream filled Halloween Oreos, pulled pork sandwiches).

You also don’t want to get the reputation as The House To Avoid because you gave away the wrong thing last year. Anything from the fruit and vegetable families qualifies here, as do homemade taffy, stale candy corn, or bulk stationery. On the other hand, there’s no real risk of retribution, because the “trick” option rarely exists anymore. What’s the last time a house got egged over a bagful of zucchini sticks?

Here’s to a Happy Halloween. Lots of families need it as a distraction this year. And remember, when it comes to telling hair-raising stories, avoid the recent ugliness and stick to the classics from days of old. Instead, tell your kid about when you invested in internet stocks. Oooh, scary!