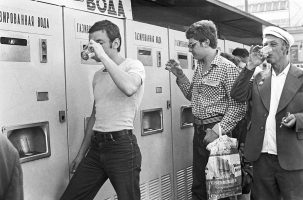 Thirty years ago this week, I undertook one of the great adventures of my radio career — broadcasting my morning radio show on WCXR/Washington from Moscow.

It was June, 1989, three years after Chernobyl and five months before the Berlin Wall came down. But it was still The Soviet Union, the country we’d been taught to fear since childhood, when we learned to duck and cover beneath our school desks in case Those Godless Commies ever detonated an atomic bomb nearby. It was all a lie, including the fact that the desks were highly unlikely to shield us from radiation in that they were not made of lead. Now, of course, we have more to fear from Russian interference in our elections than from its ICBMs and MIRVs.

I don’t remember who originated the idea of broadcasting from Moscow, but when I learned it would be the first time anyone had done so from their capital city to ours, I got excited. We learned later that Radio Moscow, whose studios we used, also recorded the shows and used portions on its airwaves after we’d left.

I have lots of memories of that week which I’ll share with you over the coming days, but let’s start with The Juice Machine.

When I announced on the air that we would be taking this extraordinary road trip, I asked any listeners who had been to Moscow to call in to share their experiences and give us an idea what to expect. I’m not sure I would have gotten much response were I on the air in St. Louis or Hartford, but this being DC, there were plenty of diplomats, business people, and others who freely shared their stories.

One of the things most of them told us was that, in Russia, whenever there was a line for something, the locals almost always got in it, no questions asked, even if they didn’t know what was at the front. Whatever it was, they probably needed it. They’d patiently wait for what could be shoes or frying pans or pencils or — the greatest possible find — toilet paper! We experienced this early in our visit when I saw a line of people queued in front of a kiosk in the middle of a sidewalk. We were thrilled to discover that the item for sale was a kind of cheesy bread, which we bought and munched on as we walked. Pretty delicious.

But the longest line we encountered, in a park we were wandering through not far from our hotel on our very first day, was for a vending machine that dispensed juice, but not in paper or plastic containers like you’d fine in the US. Instead, there was a glass on a shelf. When it was your turn, you picked up the glass, put your money in the slot, then pressed a button that caused slightly-soapy water to spray into the glass. After you poured that out, you held it against a lever which started a stream of a few ounces of juice. Then, you stood there and drank it. When you were done, you put the glass back on the shelf and stepped away so the person behind you could follow the same steps.

None of the members of our crew — about a dozen in all, including a newlywed couple who’d won the chance to join us via an on-air giveaway — were willing to give the juice machine a shot. They were all concerned about hygiene, commenting on how using a common glass was just asking for trouble. But I was not to be dissuaded. After all, I needed things to talk about on my radio show and, besides, it was a hot day and I could use some refreshment. So, I waited my turn behind dozens of Russians until I got my chance. I did what I’d observed them doing, rinsing the glass before filling it, but paused for a moment as I looked down at what I was about to drink.

It didn’t look particularly appetizing, sort of a faint greenish-yellow color, but there was no turning back now. Fully aware of the line of thirsty people behind me I didn’t want to hold up — talk about peer pressure! — and surrounded by colleagues who were making faces and saying, “Ewww!”, I tilted the glass towards my lips and drank, not sure what to expect.

The verdict: it tasted like lukewarm, extremely diluted grapefruit juice. Not good, not horrible, but also less than invigorating.

That was to become a metaphor for the series of radio shows I’d do over the next few days. I’ll tell you more about that soon.

This is the first in a series. Read part two here, part three here, and part four here.