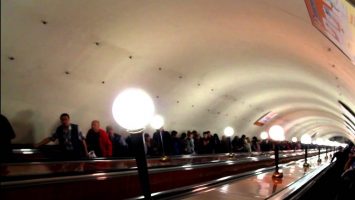 This is the third in a series. Read the first part here, the second part here, and the fourth part here.

By 1989, I had been in a lot of subways (New York, London, Boston, Philadelphia), but had never seen anything like the Moscow Metro.

There was real artwork on the walls of the stations. Not graffiti or posters, but framed paintings and mosaics. The floors and walls were almost as clean as those in the Toronto subway, with nary a cigarette butt nor gum wrapper anywhere. The escalators we used to get down to the stations were the longest I’d ever been on — they went even deeper than the Metro station in Washington’s Dupont Circle. They were incredibly fast, too; stepping on one was like hopping aboard an already-in-motion ride at a theme park.

On one of our sojourns around the communist capital, we were on the up escalator, nearing the top, when a woman in front of me stepped off and stopped — a very bad move in such a crowded environment. The escalator, packed with people, kept pushing me up and forward, until I had no choice but to step off, too. I tried to perform a lateral maneuver to get around her, but there wasn’t room. And that’s when I felt the tugging on my foot.

In those days, I wore Converse Chuck Taylor All-Star sneakers all day, every day. I knew that Chucks were essentially nothing more than a couple of pieces of canvas stapled onto a sole made of old truck tires, but they were really comfortable, and wearing them had become kind of a trademark look for me (in fact, for our wedding, my wife bought me a new pair and insisted I wear them during the ceremony!). They were the favored basketball shoe of my youth, and I remained a steady customer until I turned 50, going through several pair a year from daily wear and tear.

Unfortunately, Chucks were not made sturdily enough to handle the gritted teeth of a Moscow subway station moving staircase. That tugging on my right foot was the escalator, just doing its job and not used to someone unable to disembark, as it tore the heel off one of my Chucks completely. I immediately realized something was seriously wrong. Trying to avoid the crush of all the people coming up the escalator behind me while also not having the rest of my sneaker — or any part of my flesh — consumed by the machinery, I lurched into the now-stationary Russian woman, pushing her out of the way and stumbling into the clear.

Seeing this, but oblivious to the fact that a mechanical monster had just tried to consume her husband, Martha — who had been behind me — asked what was wrong. I picked up my foot and showed her the portion of my sock that had formerly been protected by my favorite footwear. She remarked, “Whoa! Are you okay?” I assured her I was, but that I couldn’t continue on our adventure wearing a sneaker and a half.

Fortunately, I’d brought a backup pair, but it was in our hotel room, so we re-entered the subway to retrieve it. I may have looked ridiculous walking along with my heel hanging out but — and this is how I viewed pretty much everything that happened in my life in those days — at least I had another story for my radio show!

This is the third in a series. Read the first part here, the second part here, and the fourth part here.