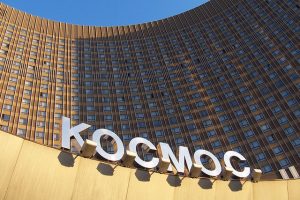 This is part four in a series. Read the first part here, the second part here, and the third part here.

Before leaving for Moscow in June, 1989, for a week of live morning radio broadcasts on WCXR/Washington, I wondered whether we’d notice the KGB monitoring everything we did, both on the air and off. After all, we couldn’t have made our arrangements without the knowledge of the Soviet government, so surely they’d want to make sure we stayed in line.

It didn’t take long to find out.

Upon landing at the Moscow airport, we all made it through customs fairly easily, except for Martha, who for some reason was getting some serious stink-eye from the agent checking passports — a tense moment finally relieved when she offered him some chewing gum and he took the whole pack before waving her through. Once cleared, we collected our luggage and walked into the airport lobby, where we were immediately greeted by Marina, who introduced herself as our “guide.” She packed us and our gear into what passed for a shuttle bus, with a running commentary of the important landmarks of Soviet achievement we passed (none of which impressed us at all).

Finally, she stopped in front of the hotel we’d been assigned to, the Cosmos (in the Cyrillic alphabet, it’s spelled Kocmoc, which became our nickname for the place from then on). As we unloaded our stuff, I jokingly asked Marina how long she’d been with the KGB. She turned bright red while repeating, “No, no, no KGB,” then quickly walked away and went to check us in. John and I looked at each other and burst out laughing. Yep, she was our spy for the next week.

In those years, a Ukrainian comedian named Yakov Smirnoff had become famous by moving to the United States in the late 1970s and making fun of the differences between his new country and the Soviet Union, which he regularly mocked. His act was a combination of wonder and confusion about America, always tagged with his catch phrase, “What a country!” He’d become so popular that, in 1988, he’d been the entertainer at the White House Correspondents Dinner. Unfortunately for him, when the Soviet Union fell apart in late 1989, so did his career, although he eventually bought his own theater in Branson, Missouri, where he continued to perform until just a few years ago.

When Martha and I walked into our hotel room, I noticed there were two beat-up old TVs on the desk, one on top of the other. I immediately thought of one of Smirnoff’s lines: “In United States, you watch TV. In Soviet Union, TV watches you!” Here, in the Kocmoc, both could be true.

Once we’d unpacked, Martha lay down while I met some of my colleagues to go for a walk and see the surrounding area. Naturally, Marina went with us — after we’d given our hotel keys to the Key Lady. In the Kocmoc, each floor had a woman who sat at a table near the elevator. Whenever you left, you had to hand over your room key, which you could retrieve upon your return. Since only non-Russian-citizens were allowed to stay in the Kocmoc, the Key Lady spoke enough English to conduct the simple transaction that made up her entire job: take key, give key, say goodbye.

Those were not the only peculiarities of the Kocmoc. When we all reassembled a few hours later for dinner, Marina led us into a large room (the size of a hotel ballroom) and to our assigned table. We had no idea what the food would be, as we were never offered menus, but were surprised at what we found on our table. There were two bottles of wheat soda, room temperature. Marina assured us it was delicious. Since I had vowed to try everything on this trip so I’d have plenty of material to talk about on my radio show, I poured some into a glass and tasted it. Just horrible. Even worse than the celery soda my father enjoyed. There are a lot of wonderful things you can do with wheat, but making a delicious soda is not one of them.

Next to the bottles was a plate with pieces of cheese and salami. The cheese had possibly been refrigerated at some point, but had then been left on the table for quite a few hours, allowing condensation to form and make it look sweaty. That actually looked appetizing compared to the salami, whose contents were the exact opposite of what we were used to in the US. Instead of flecks of fat surrounded by meat, this was mostly fat, with bits of meat in it. It, too, was served at room temperature, which puzzled us until we found something out a couple of days later. It turned out that, in order to save electricity (of which the Soviet Union did not have an abundance), the kitchen’s refrigerators were turned off every night after dinner, then not turned on again until the next afternoon.

Eventually, three waiters appeared, carrying plates containing what we were told was Chicken Kiev, but it was so over-battered and fried that, for all we knew, it could have been any random animal. Dave’s wife, Julie, took one bite, barely swallowed it, then announced she hadn’t planned on losing a lot of weight on this trip, but was destined to, if all the food tasted like this.

Sadly, we were served that same chicken dish, along with the wheat soda, sweaty cheese, and fatty salami, for dinner every night. I became jealous of Mark, our promotions director, who was an Orthodox Jew. Not trusting the Soviet chefs to keep things kosher, he had brought along one suitcase filled entirely with jars of peanut butter and cans of tuna fish.

One night, after finishing the radio show (which we did from 2-5pm Moscow time so it could be live in morning drive in DC), we convinced Marina to take us somewhere else to eat. She went away for several minutes, then announced we’d be dining in one of the finest restaurants in the entire USSR. The place actually turned out to be pretty fancy and, like the Kocmoc, was not open to the locals, only Western tourists paying in “hard currency,” meaning dollars, not rubles. Even Marina couldn’t get in, so we had our first un-escorted meal of the trip.

When we were seated, most of our party was thrilled to find a gigantic bowl of cherries in the middle of the table. It was the first fruit any of us had consumed in days, so it went fast. Then a waiter, who must have been told I was in charge of the group, came over to explain all the entree options to me. By “all the options,” I mean both of them: pork steak or pork tongue. When I repeated this to my colleagues, they all giggled nervously and ordered the pork steak. Mark said he’d just have cherries. I suspect he’d filled up on Jif before we left the Kocmoc.

After dinner, we needed a cab ride back to the hotel. Before leaving the US, one of my listeners who had been to Moscow told us that hailing a taxi there was quite different than in DC. You could keep your arm up for as long as you wanted, and the cabs would simply drive right by. Why? Because, under the Soviet system, the drivers got paid a certain wage for the day, regardless of how many fares they picked up. And since tipping was officially unlawful, they had no incentive to stop for anyone.

But we’d also learned a secret.

Just like the pack of gum that eased things for Martha at the airport, Russians craved American cigarettes. Therefore, in prepping for the trip, we had each bought a carton of Marlboros, a pack of which Martha had in her pocketbook. She stepped to the curb and held it aloft. Within two seconds, a cab veered across the wide boulevard and pulled to a stop in front of us. Several of us got in and told him we were going to the Kocmoc. When Martha handed over the pack of Marlboros, it was as if the guy was driving a getaway car. He took off, zooming through traffic so fast we were pinned to our seats. Ten minutes later, we were standing in front of the Kocmoc again.

It wasn’t until I told that story on the air the next day that the same listener called in to say, “You gave him the whole pack? He would have driven you for one Marlboro!”

This is part four in a series. Read the first part here, the second part here, and the third part here.