I Am A Pizza Snob 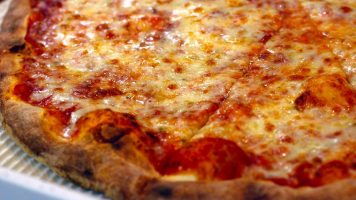 I am a pizza snob.

It has always been my favorite food. I grew up in the New York area, where my parents, brother, and I were regular customers of The Pizza Pub, run by Nick and Joe, who looked exactly the way you’re imagining them right now. We ate a lot of their pizza. The Pizza Pub was between my high school and our house, so I’d often stop by for a slice while walking home. In high school, I became their weekend delivery boy.

I loved the job, and not just because they let me have two free slices during each shift. I got a kick out of driving around with the radio blasting, inhaling the wonderful garlic smell that filled the car, and seeing smiling faces when customers opened the door and saw me holding the pies they’d ordered. Of course, being a teenage boy, I dreamt that one day, some hot woman would toss aside the hot pizza, invite me inside and do the kind of things that only occurred in Penthouse Forum letters. But it was not to be. All of my tips were in cold cash. When I graduated and went to college, the job stayed in the family as my brother took over the Pizza Pub delivery route — and he never had a triple-x customer encounter, either.

I once asked Nick and Joe if it was their sauce recipe or the cheese that made their pizza so great. Joe told me it had to be the sauce, because every pizzeria in that region had to buy their cheese from the same supplier. When I asked why, he replied, “Because we don’t want our legs broken.” That was my ten-second economics lesson in the reality of business in 1974 New York.

In that area, there are so many good pizza places, it’s near impossible for delivery chains like Domino’s and Papa John’s to get a decent share of the market. Any local pizzeria’s product is better than the corporate dreck. The problem came when I moved to other parts of the country.

First, to Connecticut, where all the Italian restaurants in the early 1980s seemed to be owned by Greeks, who cut their pizzas into jigsaw puzzle pieces instead of slices. Later, when my wife and I moved to Virginia, we had to taste test half-a-dozen pizza places before we found a single one (Joe’s) that I found palatable. It was even worse once we got to Missouri. The top local chain here is Imo’s, which doesn’t even put mozzarella on its pizzas. Instead, its founders invented something called provel, which tastes more like industrial plastic than cheese — but the locals love it. To our absolute horror, when my daughter was very young, she liked Imo’s, too. It made my stomach hurt just to order one for her.

Things got a whole lot brighter when a guy named Dave from South Jersey opened East Coast Pizza in the Chesterfield Valley. During our first visit, as soon as I picked up a slice and took a bite, the guy at the next table asked, “What part of New York are you from?” He was tipped off by the way I folded the crust in half, the only way real pizza should be eaten. From that first taste, we became regulars. Even though Dave is gone, we’re still there a couple of times a month — at least.

The best white pizza I’ve ever eaten is at Secret Pizza in the Cosmopolitan in Las Vegas. I don’t know if Secret Pizza is its real name, as there are no signs anywhere telling you where it is (it’s not even listed on the hotel’s website!). You just have to hear about it via word of mouth — which I’ll share with you now. Take the escalators to the third floor and walk straight ahead to an unmarked hallway surrounded by upscale eateries. If it’s lined with record album covers by various Italian singers, many of whom you’ve never heard of, you’re in the right place. Down that hall lies paradise, a small shop with about six stools, a counter, and an oven that consistently turns out great pizza. I stop in during every Vegas trip, and I’ve never been disappointed.

The only other places I’ve found pizza to my liking were Rome (ahh, that pizza al taglio) and Chicago. What New York is to a regular pie, Chicago is to deep dish, and one of its best purveyors is Gino’s East (along with Giordano’s and Lou Malnatti’s). You gotta be patient when you order deep dish, because it takes about 40 minutes to make, but wow, is the result worth it.

This morning, I saw a Gino’s East ad on Facebook offering to ship its pies nationwide. No, thanks. Pizza of that quality is only good when it’s fresh from the oven. Take it from a former delivery guy: the further pizza travels, the worse it tastes.

We have a chain here in St. Louis called Pi that I’ve been to several times. I love its cornmeal crust deep dish, but the closest Pi is a 20-minute drive, and the few times I’ve ordered one for pickup, I ended up with a not-so-hot meal by the time I got it home. Insulated bags are no help, either, as both the box and the pie get sweaty because of the steam and condensation.

I’m also sure that, to ship it, Gino’s East has to freeze the pizza, which is a crime against all food. Feh. There is no such thing as good frozen pizza — from any brand, and with any cheese.

Even if Nick and Joe made the sauce.