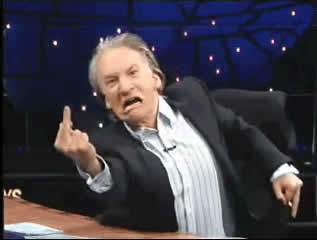 Although I’ve enjoyed some of Bill Maher’s act for years, there were parts that drove me crazy, like the way he berates his audience when they don’t laugh at one of his lines or, more importantly, his occasional stupidity on anti-science matters. Yet I looked past that and continued to watch his show because there were (usually) interesting guests having interesting conversations, and his New Rules segment more often than not left me with a smile on my face.

But I won’t watch Maher anymore.

With the measles spreading across the country, Maher has recently doubled-down on his anti-vaccination stance, and has finally gone too far for me — as he has for David Gorski, a surgeon who is one of the best science bloggers online, under the nom de plume Orac. In a piece posted two weeks ago (well before Maher went off on a long anti-vax, anti-science rant last night on “Real Time”), Gorski wrote:

My first acknowledgment of Bill Maher’s antivaccine proclivities was nearly ten years ago, when Maher promoted the myth that Louis Pasteur had “recanted” on his deathbed, adding to that a statement that “I don’t believe in vaccination, either” because it’s a “theory that I think is flawed.” Indeed, he’s been promoting the lie that vaccines don’t work and that the influenza vaccine causes Alzheimer’s disease since before I started blogging (although it’s been nine years since I first noticed it) and proclaiming his lack of belief in “Western medicine” to the point of telling David Letterman after his heart surgery that maybe he could come off his medications.


A few years ago, though, Maher seemed to have made a strategic decision not to spout off so much about vaccines and his belief that, if you just eat the right foods and keep the body “pure,” you will be magically immune to the flu. Maybe it was because his pseudoscientific invocation of “will” was so ridiculous that Bob Costas mocked him for it on his very own show, dismissing his claim that he wouldn’t catch the flu on an airplane sarcastically by saying, “Oh, come on, Superman!” Or maybe it was the flak so justifiably aimed at the Atheist Alliance International for giving him the Richard Dawkins Award in 2009, which inspired me to liken giving Maher such an award to giving Jenny McCarthy a public health award. Back then, when he tried to defend himself, he just dug himself in deeper and deeper, to the point where Chris Matthews even compared him to a celebrity Scientologist like Tom Cruise denouncing psychiatry. Or perhaps it was Maher’s foolishly ignorant attempt to refute Michael Shermer’s open letter to him urging him to reconsider his antivaccine and anti-“Western” medicine views. Or maybe it was his endorsement of cancer quackery.


Whatever the reason, for the most part, Bill Maher has been relatively quiet about vaccines and medicine of late. Sure, I saw him or heard of him reverting back to form briefly on various occasions, letting loose with a sarcastic joke or two about big pharma or the like, but quite infrequently. He seemed to be sticking to politics and pop culture and laying off of medicine for the most part. Actually, I was grateful. It made Real Time With Bill Maher actually watchable for me, as in general I could compartmentalize and appreciate Maher’s other humor, as long as I wasn’t having his quack-friendly tendencies shoved in my face every episode. Too bad it couldn’t last. Or maybe it did, but Maher just can’t resist every so often letting people know he’s still antivaccine.

I agree with Gorski about compartmentalizing and appreciating Maher’s other humor, as I too brushed off the comedian’s comments in that realm because I enjoyed his biting political and topical remarks. But the Bad Bill has shown his face once too often for my taste, and I worry that he’s now replaced Jenny McCarthy as the most-watched-least-informed celebrity-with-a-big-audience and that too many of his viewers will believe his vehement anti-science garbage to the detriment of all of us.