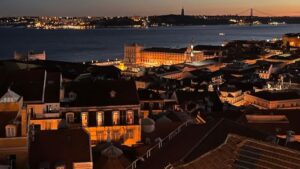 My wife and I are just back from a ten day vacation in Spain and Portugal, two countries we’d never visited. We started researching this trip in 2019 and hoped to go in 2020, but the pandemic derailed those plans. We finally made it, and I’ll be sharing stories about it over the next few days.

Neither of us is fluent in Spanish, though we know enough to get where we want to go and order what we want to eat. When that became problematic, most of the people we dealt with knew enough English to equalize matters. That was not true in Portugal, where they have a bit of an inferiority complex and do not appreciate being spoken to in Spanish. In fact, we were advised not to speak anything but English. That was a good tip, because Portuguese is much tougher to learn.

It was nice to be in a region that puts so much value on napping. Spaniards may call it a siesta, but it’s the same concept — taking a break late in the day, a concept I relied on heavily during my 15 years doing morning drive radio shows. I’d hit the wall around 3pm and need to crash for a couple of hours or else Martha would get home from work and find me seriously dragging.

What I could never do was wait until 9pm or later to have dinner every night, as they do in both Spain and Portugal. The good news for us was we were often the only couple in a restaurant at 7:30 or 8pm. The rest of the crowd only filed in as we were leaving.

It’s odd as an American to get used to the concept of not tipping for service. Unlike in the US, restaurant employees there are paid an actual living wage, and thus don’t have to depend on the kindness of strangers. That did not diminish the level of service we witnessed everywhere we went. Still, it’s not an insult to leave two or three Euros after paying the check.

Speaking of that transaction, here’s where Europeans are way ahead of us. If you’re going to pay by credit card, they bring a wireless device to your table and all you have to do is tap your card on top to complete the transaction. At no time does any employee even touch your card, and it all happens very quickly. I’ve seen a few US restaurants begin to use this technology, but it’s been standard in Europe for at least a decade.

Tourism is the industry that keeps Lisbon thriving — one of our tour guides told us more and more of her customers are now Americans. That may explain why the music in so many consumer-facing businesses was a mix of contemporary US pop and classic rock. But in one restaurant, we were surprised to be exposed to smooth jazz versions (with vocals) of a bunch of tunes from the 1970s. Talk about an eclectic playlist: back to back to back we heard “Don’t Leave Me This Way” (originally by Thelma Houston), Barry Manilow’s “Copacabana,” and Led Zeppelin’s “Stairway to Heaven”!!! The computers spitting out songs at radio stations with names like The Arch or Jack, which overuse the word “variety,” could not have amazed me more.

While I’m on the subject of music, I would be remiss if I didn’t mention the flamenco show we attended at Tablao Villa Rosa in Madrid, the oldest such club in the world. Over the course of an hour, three dancers (2 women + 1 man) each performed solo to the accompaniment of two guitarists and two singers. The women started out looking angry, which may have something to do with the fact that they had to perform intense dances wearing velvet dresses, which did not exactly wick away their sweat. Their faces loosened up after a while and they smiled, but not until they’d exerted tremendous amounts of energy in routines that seemed somewhat improvised. In addition to the foot pounding (how do they do that over and over without getting shin splints?), they also had the loudest finger snaps I’ve heard since “West Side Story.” Impressive on all counts.

I’m a fan of big urban green spaces like Forest Park in St. Louis, Central Park in New York, and the Public Gardens in Boston. Now I can add to that list Retiro Park in Madrid, which is dense with trees, yet has plenty of open spaces, including a lake where people can rent rowboats. It’s also home to the Crystal Palace, a large event space almost entirely made of glass. It’s adjacent to a pond full of ducks and turtles. Quite a sight. We happily strolled the full length of the park and observed many Lisbon locals enjoying the surroundings, too.

We also walked by the Banco de España and couldn’t help think of the Netflix series we binge-watched at the beginning of the coronavirus crisis, “Money Heist.” I spotted no suspicious characters in Dalí masks, but we didn’t check The Mint.

Both Madrid and Barcelona have major graffiti problems. Sadly, there’s hardly a block without some building that’s been tagged. But much of the architecture is breathtaking, particularly in Lisbon, with wrought-iron balconies and so many exteriors covered with remarkable tile patterns. We were so taken that we went to the National Tile Museum to see even more — and were glad we did.

Finally for now: I couldn’t help noticing the overwhelming majority of women under 30 in Barcelona were not wearing bras. I don’t mean to sound like a creepy old guy who stares at women’s breasts, but after I pointed it out, even Martha noticed. Maybe the trend can be explained by the extreme heat. Either way, I doubt anyone is complaining. Except maybe bra salespeople.