This is a series of stories about our recent trip to Spain and Portugal, our first time outside the United States since before COVID closed us off from the world. Read part one here. 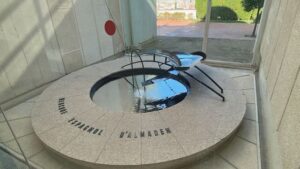 Despite my inability to understand art, I accompanied Martha to see buildings designed by Antoni Gaudí and museums devoted to the works of Pablo Picasso and Joan Miró. The latter had an exhibit my wife especially wanted to see: a mercury fountain (pictured above) designed by Miró’s close friend Alexander Calder. When it was first installed, it was an open-air display, but then someone remembered that even the vapor from mercury is poisonous, so exposing the public to it wasn’t such a great idea. Now, it’s behind glass, but no less interesting to view.

One of the joys of our Iberian adventure was taking walking tours of each city, including a great one in Lisbon with a guide named Sara from GuruWalk. Over the course of three hours, she taught us a ton about Portugal, including the fact that it was ruled by a strict dictatorship until 1974. In fact, it was such a closed society (think North Korea) that its people didn’t know in the early 1940s there was a second World War going on! GuruWalk offers the tour for free — all you have to do is sign up ahead of time, meet at the designated spot, and give Sara a nice tip at the end. She was well worth it.

Three years ago, I wrote about our frustration upon returning to the US from our last international venture. We ran into massive backups at Customs and Border Control at Newark Airport, where we spent over 90 minutes just trying to get back into our own country. Shortly thereafter, we signed up for Global Entry, which only costs $15 more than TSA Pre, the program that speeds us through domestic outbound airport security.

This time at Newark, we followed the Global Entry signs to one of several available kiosks, which took our photos, processed them, and gave us receipts, which we then handed to an officer on the way out. Total time: 30 seconds. Considering it’s good for five years, the $100 cost and the massive time savings make it the best and most efficient travel bargain I’ve ever used. We look forward to using it again and again as we continue to travel in our retirement years.

I spotted a white panel truck parked on the street with only the word GAS on the side. If it had been spelled with a Z, it could have come from a 1960s-era episode of “Mission: Impossible.”

There’s a lot less sitting in the hotel room and using the TV remote to flick around when you’re in a country where the only channels in English are CNN International and the BBC. Worse, they were both doing nonstop coverage of the death of Queen Elizabeth, which I have no interest in whatsoever.

Here’s something I didn’t know: scrolling through Twitter in another country gives you the same tweets you’d see at home, but the ads are in the native language.

Finally for now, a travel truism, regardless of destination: if you only stay in a hotel for three nights — as we did in three cities — you will never figure out which switch turns on which light.