This is a series of stories about our recent trip to Spain and Portugal, our first time outside the United States since before COVID closed us off from the world. Read part one here and part two here. 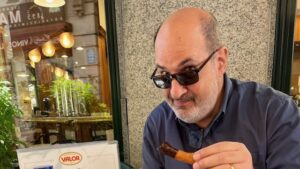 Every American knows what “grilled cheese” means. It’s two pieces of buttered bread with a few slices of cheese in between, heated in a frying pan or on a griddle until the inside is melted and the outside is golden brown.

But in Spain, where we just spent six days, there’s a different kind of grilled cheese. They take a few ounces of provolone, put it in a 5” diameter pan with some olive oil, and heat it — without bread — until the cheese is a nice, gooey consistency.

To say this fork-and-knife delicacy is delicious would be a major understatement. Martha and I shared an order as an appetizer, and the first bite had us looking at each other with huge smiles on our faces. Not being chefs, we couldn’t identify what else was involved in the recipe (spices, etc.), but we vowed to never find out for fear we’d start making and eating grilled provolone every day at home.

We first enjoyed it at 9 Reinas, a Barcelona restaurant recommended by a front desk clerk at our hotel. Then we couldn’t resist having it again at the Madrid steakhouse Raza, which my brother and sister-in-law recommended. Both times: marvelous.

Among the other mouth-watering delicacies we enjoyed in Spain were freshly-fried churros dipped in a cup of hot chocolate. I don’t mean like a mug of Swiss Miss. I mean a coffee cup filled with melted dark chocolate of a quality and thickness we’d never experience. I know you wouldn’t respect me if I came to this conclusion based on a single sample, so we tried the churros-and-chocolate combo at four different places in Barcelona and Madrid. They were all magnificent.

Then there’s Iberian ham. No matter where you go in Spain, it’s on every tapas menu and every food tour. Supermarkets all have an entire section devoted to ham in different varieties which, at the top end, can be as expensive as $90/pound. We were not served that quality, but tried several that made our tongues quite happy.

We learned something about paella on this trip. There are plenty of restaurants that have paella on their menus, but too much of it is reheated from a supply made earlier. Truly good paella — like the grits in “My Cousin Vinny” — demands 20 minutes to make and, when done well, can be spectacular.

We found a small, out of the way place in Barcelona called Raco Bonsucces. Run by the same family for three generations, it only has ten tables, but wow, do the chefs know how to take their time and make truly top-notch paella. And, according to my wife, a delicious sangria made individually by the bartender for each customer.