This is a series of stories about our recent trip to Spain and Portugal, our first time outside the United States since before COVID closed us off from the world. Read part one here, part two here, and part three here. 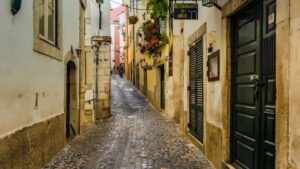 In every city where I’ve been a resident or visitor, one of the locals has told me, “No one here knows how to drive.” It’s usually not true.

The most striking example was in Lisbon, Portugal, where my wife and I just spent three days. It’s a very hilly city — even more so than San Francisco — with streets that are better described as alleys, so narrow you’d have to fold in the sideview mirrors on your American vehicle to avoid scraping the buildings on each side.

Many of those streets — not the bigger thoroughfares, but the ones through residential communities, often lined with taverns and restaurants — have sidewalks separated from the driving lane by small bollards. The walking area is the width of your average human, but since I’m the width of one-and-a-half humans, I had to turn sideways so a car could squeeze by.

Yet somehow, the taxi and Uber drivers in Lisbon manage to get from one place to another rather easily. Granted, they occasionally have to use Google Maps because there are so many little roads it would be impossible to memorize every one and mentally determine the best route. In addition, they’re doing it in cars with manual transmissions, the bane of every “The Amazing Race” team that never learned to drive a stick.

If you want to be successful in towns like that, you’re best off being a mechanic who specializes in transmissions and clutches, which must wear out at an astonishingly high rate. Maybe tire alignment and shock absorbers, too, while you’re at it.

The job you don’t want in Lisbon is delivering food — or anything else — by bicycle. I was impressed whenever we passed a courier as they pedaled up hill after hill. To make matters worse, the majority of the roads in central Lisbon and the surrounding hills are made of cobblestone. You can imagine how bumpy every ride must be.

Of course, they’d probably tell you, “No one here knows how to ride a bike.”

For one more story from our trip to Spain and Portugal, click here.