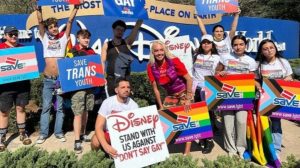 After badly botching its response to the cruel Don’t Say Gay law in Florida, Disney says it’s stopping all political contributions in that state. Question: why punish the Democrats when it’s the extremist Republican majority which rushed the bill through?

While we’re there, has anyone heard anything on the subject from Comcast/NBC/Universal, which also runs a huge theme park in Florida? How come that company’s getting a PR pass?