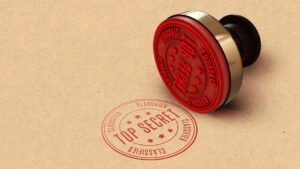 Let me start with a confession: if there are any documents with classified markings in my house, I have no idea how they got there. Or why they’d be classified.

Now that it turns out even Mike Pence had classified papers at home, perhaps there should be a better system of keeping track of this stuff. After all, if it’s that important, how could it be so easy to just take home with you? Or on the day you leave office for your staff to just dump it into a banker’s box along with personal papers, unused Bed Bath & Beyond coupons, and a GrubHub menu with a ketchup stain on it?

Whether you’re changing jobs or cities, all sorts of stuff can be swept up along the way. When my wife and I moved from our first apartment in West Hartford, Connecticut, to a slightly larger one on Long Island because I’d been hired by NBC Radio in New York, the new station paid for a company to not only transport the few things we owned, but also to pack it all. When the movers arrived, they asked us to leave for an hour or two while they covered the furniture in plastic and wrapped everything in the kitchen — each plate and glass and knife and fork — in newspaper pages to keep it from being damaged on the trip. When we finally got into our new place and opened all the boxes, we discovered they had not only wrapped our kitchen wastebasket, but the garbage that had been inside had been bundled separately!

As you get older and move from one house to another, it’s not unusual to take boxes you never even looked in the last time you changed your address, most of which you shouldn’t have saved because you never need to see them again. Oh, look, here’s a memo I got at WMAL in 1998 with the new security code for the back door. Here’s the 1991 order form from Columbia House Record Club notifying me the album of the month was “Pocketful Of Kryptonite” by Spin Doctors. And here’s a pink While You Were Out message the receptionist at KTRS gave me when consistent whiner and perennial political candidate Bill Haas left his phone number for the umpteenth time (and I still never called him back). Sure glad I saved all of that!

Perhaps the federal government needs to institute a different color paper for each level of security — from “classified” to “top secret” to “for your eyes only” — something other than the plain white pages the more mundane stuff is printed on. In Hollywood, there are various versions of TV and movie scripts as they get updated and rewritten throughout a production, and everyone knows what’s most current by the color. “Okay, everyone, we’re now working with the teal pages, so be sure to shred anything that’s tangerine-colored or mentions giving Alec Baldwin a gun!”

Maybe there should be new rules about what gets the “classified” markings. Anyone who’s seen the movie “Sneakers” knows the government has too many secrets — or maybe an overzealousness to assign those classifications to anything and everything, regardless of the agency responsible for it or whether it’s a matter of national security. The nuclear launch codes for today? Check. The daily pH level of Yellowstone Lake from 1991 to 2003? Not so much. Marjorie Taylor Greene’s memo warning of Jewish Space Lasers? Forward immediately to Tucker Carlson.

I’m not going to defend Mike Pence about anything he’s said or done, but I bet he — like Biden — actually read the sensitive paperwork he brought home. Unlike Trump, who never glanced at a single paragraph and thought proper disposal meant flushing it down the toilet.

Meanwhile, George Santos, sensing the news media spotlight is moving off him, has declared, “I was in charge of the national archives in 2004 and personally protected confidential items from being stolen by Nicolas Cage! Also, I have something top secret in my pants right now!”