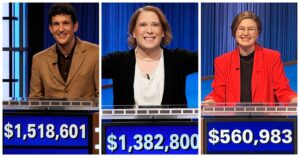 I couldn’t figure out why “Jeopardy!” will air an exhibition match between super-champions Mattea Roach, Amy Schneider, & Matt Amodio today during its Tournament Of Champions.

Then I realized it’s because many affiliates that air the show at 7:30pm will preempt it for election coverage tonight. It won’t affect us in STL because it airs here at 4:30pm.

Those three were given byes through the quarterfinals of the TOC, but they’ll be part of the semi-finals that begin airing tomorrow, hopefully with no preemptions.