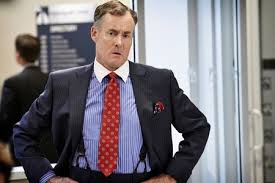 You may know John C. McGinley from his decade as Dr. Perry Cox on the TV show “Scrubs,” or you may have seen him as Dodgers announcer Red Barber earlier this year in the Jackie Robinson movie, “42.” Now he’s starring in a new sitcom that airs Thursday nights on TBS called “Ground Floor,” and joined me on America Weekend to talk about it. We discussed: