Jon Macks On His 22 Years With Jay Leno 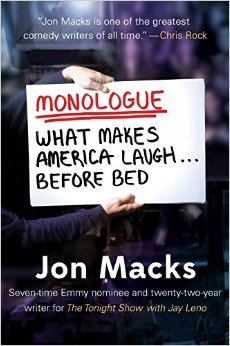 Over the course of 22 years, my friend Jon Macks wrote 500,000 jokes for Jay Leno to use on “The Tonight Show.” He’s also written for Billy Crystal, Chris Rock, Steve Martin and others who hosted the Academy Awards, as well as the Emmys, Tonys, Golden Globes, and pretty much any other awards show you can name. For several years, Jon was also a contributor to my radio show, doing a weekly segment in which he’d joke about the news, celebrities he’d run into, and more.

Now Jon has written a book about his experiences, “Monologue: What Makes America Laugh Before Bed,” so he returned to my show for this extended interview. We talked about: