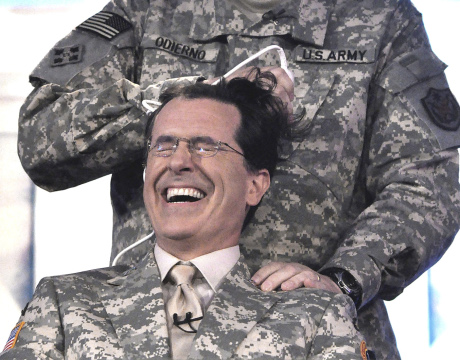 There’s been a lot written in the last two weeks about the shift in late-night television created by Conan O’Brien replacing Jay Leno on “The Tonight Show.”

Conan’s initial ratings were high because even those who didn’t watch Leno were curious what the “new guy” would do. Answer: pretty much the same thing he used to do, only an hour earlier and with a much bigger stage. Now his ratings have settled down and he’ll eventually stabilize at a smaller number than Leno had, giving Letterman the lead in that slot again — not because Dave will have a lot more viewers, but because Leno’s fans will have found something else entirely.

David Letterman can still create magical moments, like his show with money-in-the-bank guest Julia Roberts last night. With word that he’s likely to sign a new deal to stay on CBS through 2012, he’ll match the 30-year record of his hero, Johnny Carson. While he hasn’t dominated the time slot as Carson did because the marketplace has changed so much, that’s still a very impressive feat.

Meanwhile, Craig Ferguson and Jimmy Kimmel have carved out their own niches, but Conan’s replacement on “Late Night,” Jimmy Fallon, still hasn’t figured out what works and what doesn’t, leaving him just slightly higher on the midnight pegboard than Carson Daly (a/k/a The Guy You Didn’t Even Know Has A Show).

But while the hosts on NBC, CBS, and ABC are getting all the attention, the truly original late night television continues to be created on a regular basis on Comedy Central by Jon Stewart and, especially, Stephen Colbert.

Colbert is having a great week with shows he recorded in Baghdad, in one of Saddam’s former palaces, for a huge crowd of active-duty soldiers. Many performers have gone on these USO-sponsored trips, but none recently have turned them into special TV events.

From the pre-recorded segments at basic training (the funniest since “Stripes”) to his military haircut (done by General Ray Odierno under orders of President Obama) to his rapport last night with a couple of grunts (one a woman who has earned a combat medal, the other an American Arab who volunteered for duty because he didn’t like what the enemy had done to the image of Arabs and Muslims in the US), Colbert understands his dual responsibility to entertain both those in uniform and us at home. He is even savvy enough to be carrying a golf club with him during his monologue, a nice nod to Bob Hope, who did a couple of generations of shows for those in the service during wartime.