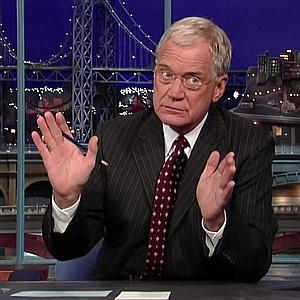 David Letterman hasn’t given a lot of interviews in the last decade or so. Whenever he had something he wanted to say, he already had his own network platform from which he could say it. That’s why I was surprised he agreed to talk to Dave Itzkoff for this NY Times piece. In it, Letterman says he knows what he’s going to do on his last show (May 20th), that he had no input into who would replace him (Stephen Colbert), and why he can’t compete with Jimmy Fallon and Jimmy Kimmel.

Then there’s this exchange:

Itzkoff: What about in 2009, when you revealed that you were the target of an extortion attempt stemming from your sexual relationships with female staffers?

Itzkoff: Did you think that was going to be the end of your career?

Letterman: Looking at it now, yes, I think they would have had good reason to fire me. But at the time, I was largely ignorant as to what, really, I had done. It just seemed like, O.K., well, here’s somebody who had an intimate relationship with somebody he shouldn’t have had an intimate relationship with. And I always said, “Well, who hasn’t?” to myself. But then, when I was able to see from the epicenter, the ripples, I thought, yeah, they could have fired me. But they didn’t. So I owe them that.

Itzkoff: Did you think people were surprised to hear you talk about these matters so candidly?

Letterman: I didn’t know what else to do. I couldn’t think of a really good lie.

He’s right that CBS would have had good reason to fire him. There’s no HR department in the country that would have allowed an employee — even a high-value highly-visible executive (which Letterman is at his production company, Worldwide Pants) — to have sexual relationships with subordinates without repercussions.

Letterman weathered that storm, both at work and on the home front (he was married while carrying on with women at the office), but will he be able to handle not having a fulltime job, and if not, what will he do next? I don’t see him doing a weekly primetime TV show, because what would that be, more of a clearly exasperated Letterman interviewing guests he barely cares about? He’s expressed a lot of admiration for Jerry Seinfeld’s “Comedians In Cars Getting Coffee,” and probably wishes he’d thought of it, but I doubt he’ll do a similar project.

My bet, for this summer at least, is that Letterman will devote himself to his 11-year-old son, Harry, completely removed from the world of daily television (there’s an argument to be made that he hasn’t actually been that engaged with that world for the last several years, as all of the decisions about “The Late Show” are handled by his staff and he just has to show up and spend an hour in front of the cameras). After that, he’ll have his racing team, his production company, and lots of people asking him to do this or that. I wouldn’t be surprised if, like his hero Johnny Carson, Letterman never finds another television project that scratches the itch in the way what he’s been doing since his NBC morning show debuted 35 years ago has (or did).